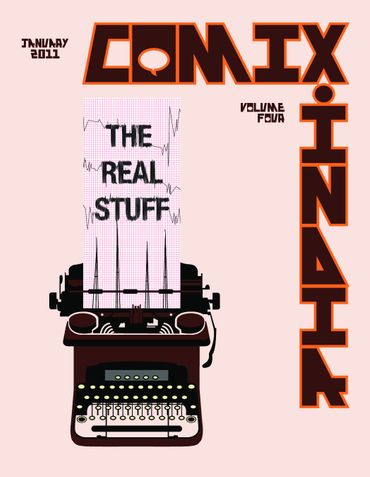 Volume 4 of COMIX.INDIA is here! The theme is non-fiction. Edited and designed by Somesh Kumar. To contribute comics to the magazine, visit https://comixindia.org/.

Sometimes things take you by surprise. Like when an unshaven man has been trudging through rough forests trying to find a likely place to clear and settle in, and he suddenly comes upon a village with all the benefits of animal husbandry and agricultural land. Surprise!

That was akin to what this naïve explorer of all things comics keeps on feeling every time he comes upon lesser-known practitioners of comics in India. Who’d-a thunk that there was so much talent out there already? If you are anything like me, under the false assumption that comics in India primarily revolves around the triumvirate of Political Cartoons (viz Laxman) – Uncle Pai’s empire (Tinkle, ACK) – Hindi Comics of the 80’s/90’s, and that new graphic novels are the next-in-line-for-promotion, then welcome to the corner of the classroom. Here we will all read Comix.India

I was told about this magazine by a friend a few months ago, but somehow categorized it as a graphic design journal, not willing to believe that these were comics (very unfamiliar looking). But a recent acquaintance with a certain Bharath Murthy (aka, Actionist) cleared cobwebs. Murthy is the man with the plan to create a space for comics creators in India. He started this magazine, four volumes old now, which takes contributions from all and sundry, and selects the best ones for printing. Seeing how experimental comics by amateurs aren’t exactly hot potatoes for publishers-distributors it is printed and shipped on an order-by-order basis.

The content offers up some pleasant surprises, and some less so. Since it is a collection of 7 comics stories (not including the editorial comic) I cannot offer any blanket judgement, I cannot offer any review. Some of the stories here are reportage, not fiction, some have excellent artwork, one is by a non-Indian (Slovenian). Homogeneity goes out the window.

What this magazine throws at you is a lot of anticipation, of the creators, the reader, and the magazine itself. Everybody becomes a part of this nouveau movement, independent Indian comics, wanting to see where it goes.

As a reader, and supporter of the art(s), I couldn’t be happier and I will give you 2 reasons why:

1. There are a lot of amateurs who want to make comics
2. Their craft is already very mature

I am all praises for this book, though it shouldn’t be inferred that the content is flawless. I guess it is something like the armed forces, where you respect them deeply because you know what they are doing is allowing you a good night’s sleep, though you aren’t unaware of their shortcomings either. Totally inappropriate analogy, I’m sure, but I think it gets the idea across.

Comix.India is then a representation of comics creators, full-time and part-time, for whom this line of work is a burning desire. Many of them have other career choices behind them, but all of them seem to have this childhood bond with comics. For them this is a great platform to try and gauge people’s reaction to their work.

This is why it is important to support an independent magazine like this – to try and foster the all-important culture that has to build around any art form. The talent is there for people to see for themselves, so why not spare some time for it?

Since you won’t find this book at any shops (purchase from comixindia.com) you may never get to see the contributors’ effort, or even hear of them. To do my bit I will end by giving you the contents list here, with some thoughts on what each of these stories meant to me.

1. From the Editor by Somesh Kumar is an edgy piece to start with. He has spent the past few months putting this together and gives us a surreal piece on crafting editorials. He, along with Upasana Mehndiratta have crafted the front and back covers (respectively) as well
2. Things Big and Small by Akshay Dhar, Ankur Amre, Arjan Vir Singh, Vivek Goel is the most young story of this collection. It voices concerns that the creators seem to associate with on a personal level – identity, peers, loneliness, though all without being depressing
3. The Vanished Path by Bharath Murthy is non-fiction reportage of the author’s (plus the missus’) trip to Sarnath. It is demi-Manga style, interspersed with photographs and archaeological history
4. Ramalama Cuu Cuu by Domen Finzgar is the only story here with a soundtrack. The artwork is very good, though its shapelessness and the overall layout make it a very tough read
5. Prisoner on Block W by Lavanya Karthik starts not-so-promisingly as the umpteenth writer’s angst story I’ve read, but redeems itself with a beautifully executed ending
6. Bahdeinkhlam by Nandita Basu is a comics diary entry (I don’t mean that condescendingly) of the author’s experience of a local Meghalaya festival, made enjoyable by its detailing of local customs and eccentricities
7. Heat of the Hell in Chernobyl by Prabhat Williams has a sense of purpose, that of telling the story of industrial disaster and human folly. I must say that both the art and the text could be improved several notches, but I would also request the creator to write more such, because such stories, spread through this medium, are very necessary as an educational tool
8. Passing By by Varun Dhanda is the most whimsical tale here with the malleable protagonist taking a train journey. The creator is probably the youngest of the lot here, but his story and his artwork grabbed my attention like nothing of late. The style of drawing is especially noteworthy, being a mix of technical drawing (like on a graph paper), hardcore pencil sketching, and the nicest use of varying perspectives