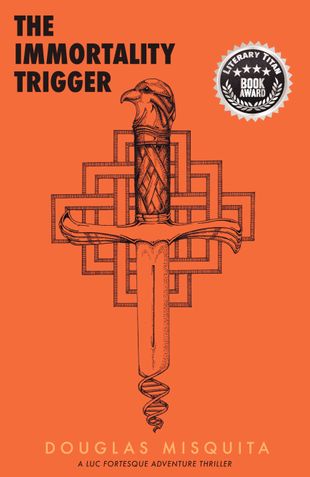 Allied paratroopers raid a secret Nazi research facility. The operation is reported as a success. But, the lone survivor, Benjamin Ezra, knows otherwise.

A drug lord, El Fantasma threatens to plunge Colombia into an era of bloody drug wars. DEA Country Attaché, Zachary Mason is in charge of a covert operation to remove El Fantasma, with the help of a vigilante, El Angel, and a retired undercover agent, Raymond Garrett.

In Naples, INTERPOL agent, Sabina Wytchoff, is investigating the death of her parents, when the Wytchoff family's association with an ancient cabal comes under investigation.

After the events of The Apocalypse Trigger, Luc Fortesque, is scouring the world for the man who tested experimental drugs on him.

Their paths will converge... violently... and conclude the mission that began in 1945.

Douglas Misquita is an action/ adventure thriller novelist from India.
The author of 5 thrillers, with more on the way, his stories are praised for their quick pace, immersive visuals, choreographed action set against the backdrop of contemporary events and beautiful locales.
Lion won The Literary Titan Gold Award; The Immortality Trigger won The Literary Titan Silver Award.
Douglas balances his passion for creative writing and music with a regular job as a software business analyst.
Find out more about Douglas, the books, download free eBook shorts, read the reviews at http://www.douglasmisquita.com

Be the first one to write a review for the book The Immortality Trigger (hardcover).