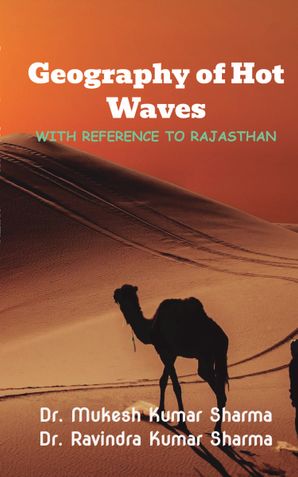 WITH REFERENCE TO RAJASTHAN

Actually, the classification of “Hot Waves or Loo” disease itself falls under the headline of “Disorders Associated with High Temperatures.” The expert (Doctors, Researchers, Environmentalists, Medical Geographers etc.) of the above mentioned specific headline : they all proposed a simple but scientific word in this context i.e. ‘Heat Syndromes’ (Heat Stress). Hence, Heat syndromes covers itself the all kind of diseases which are caused by high temperatures, sun high Insolation adverse affect, heat waves, heat spells, heat cramps, heat exhaustion, external heat injury and heat stroke.
According the dictionary of Geography, the dust storm is a geographical phenomena in which dust laiden winds blow from low atmosphere pressure area to high atmosphere pressure area, originating from a vast sand dunes topography. During summer season as the temperature increases from the month of April onwards the upper layer of sand dunes as well as vast sandy plains the creation of low atmospheric conditions established in the particular area, due to high temperature the dryness in wind also increases. The favourable creation of conditions for dust storms take placed the high temperature prevailed for continuous for many days then a permanent creation of low atmospheric pressure condition take place.
Locally the dust storm is popular by some names as – Andhi, Dhool Bhari Andhi, Andhar etc. It is also a popular proverb among native people of desert land that “the rain follows after dust storms” In Rajasthan there are total 11 districts which fall under the western Rajasthan desert region which has arid and semi arid climate types viz., Jaisalmer, Barmer, Bikaner, Ganganagar, Nagaur, Jodhpur, Churu, Sikar, Jhunjhunu. Ajmer and Pali.
There is no Region of Rajasthan in which indoor patients of “Loo” disease was not reported in their health center. Every health center has a record of out door patients, Indoor patients and death cases caused by “Loo” disease. It is very interesting to mention here that the origin of hot waves (Loo) take place in a particular district of division but its effects may be seen another districts or division. So it is not necessary that more Indoor patients may be found there origin of “Loo” disease take placed.

Dr. Mukesh Kumar Sharma is a Principal of Maharani Girls P.G. College, (Rampura) Alsisar, Jhunjhunu, Rajasthan. He obtained his undergraduate degree in Science (1998) from University of Rajasthan, Jaipur. Dr. Sharma received his Master and Ph.D in Geography from University of Rajasthan, Jaipur in 2000 and 2006. he is also a guest faculty in Singhania University, Rajasthan. Dr. Sharma was appointed as a board member in "American Journal of Environmental Science and Engineering" in 2021. Dr. Sharma has made 200 scholarly contributions, including nearly 100 peer reviewed research papers.

Informative book for Researcher, Students and Scholars. Must Read.

Other Books in Medicine & Science, Reference