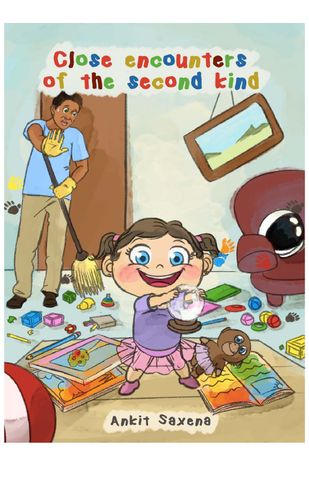 Post publishing my first book – ‘Close Encounters of the First Kind’ I felt a unique sense of accomplishment.

Did my book go on to become a New York bestseller? Absolutely Not.

Did I sell a million copies – I wish !
I was still surprised at the number of copies sold and would have never guessed such high reader interest levels.

Regardless I was happy infact I was joyous. Why? Simply because this book was a way to permanently scribe my experiences with Prisha and I am waiting for the day when she gets to read about her adventures and how me and her mom not only got on for the ride we went all in!

After Prisha turned a year old, I became a busier dad simply because she was on her feet and quite frankly me and my spouse were swept off our feet by her. On more than one occasion I thought of giving up on her monthly photoshoots and monthly letters because there wasn’t enough time – Each time I reminded myself the promise I made to myself when I wrote the first letter when she was just a week old – “I would write on her behalf until she can speak for herself”

That being said more than a couple of letters have been typed by the tired hands of half asleep father and I hope that you do not get stuck on the lack of verbose or even enough color on some of them.
Truth being told having a baby is an event but nothing compared to the years that come after that trying to raise him or her. Although the journey is never downhill it does become a bit joyous on days only to flip you over your head on the next.

For all readers of this book I also wanted to mention that having a kid would test you in ways you couldn’t imagine, your child would know how to press your buttons and would do that at will and very frequently. It is critical that you hold yourself together and remember that you have invited them to your world and hence are bound to serve!

Do I love my daughter from the bottom of my heart – Yes!

Is there a day that doesn’t go when I recollect our old days as a happy go lucky couple who could pack up their bags in a jiffy and be off to an adventure – No!

I wonder if such thoughts make me a bad parent it does make me a tired human who is on the edge of patience levels!

Whenever we saw a movie where they show the birth of a child the years are shown to go by real quick, and life is all about ooh.. aahhs and laughter. Well, it is not really like that and having a kid will test the parent’s relationship as well.

Since both are exhausted trying to keep up with someone who has 1000 times more energy than them the smallest spark lights up a big fire where all the built-up frustration acts like lighter fluid. Over the past two years I have learned that is critical to hold on to each other – Say sorry, Hug often and remind yourselves that this phase like the previous one will also pass.

Ankit is your average Dad taking hearty support from a belabored wife and superstar mom to make extrapolated claims of being the perfect spouse and father. He fails more often than he would like to admit and still gets rewarded by his loving wife and vivacious daughter much more than he should!

He continues to jot down his experiences with his growing daughter and would hopefully roll them into another book soon.