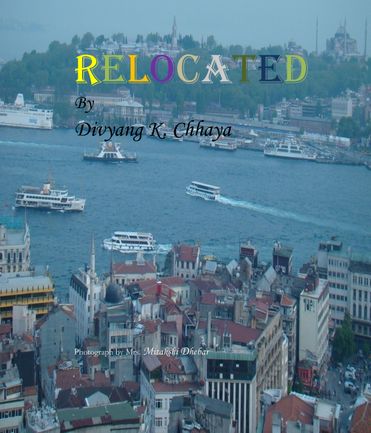 This book deals with problems faced by locals when migrants relocate. I have studied various aspects of relocation but have confined contents of this book only to issues Relocation caused in Mumbai, Pune, and Jamnagar. Basically it is light reading book and not meant to be a research material.

Official web page of the United Nations Office of the High Commissioner of Human Rights mentions a fact that “an estimated 232 million people currently live outside their country of origin, many having moved for a variety of reasons in which the search for protection and the search for opportunity are inextricably entwined.
Migration affects every region of the world, and many countries are now simultaneously countries of origin, destination, and transit. Large numbers of migrants today move between developing countries, and around 40 percent of the total global migrant population have moved to a neighbouring country within their region of origin.
Migrants are often to be found working in jobs that are dirty, dangerous and degrading (the 3 Ds). While for some migration is a positive and empowering experience, far too many migrants have to endure human rights violations, discrimination, and exploitation.
Yet, migrants contribute to economic growth and human development in both home and host countries and enrich societies through cultural diversity, fostering understanding and respect among peoples, cultures and societies. Migration is also an important means for migrants and their families to improve life conditions and realize their human rights.
See: http://www.ohchr.org/en/Issues/Migration/Pages/MigrationAndHumanRightsIndex.aspx
While this book (Relocated) does not deal with any issues directly taken up by the United Nations, but is written after cross checking many other issues that are faced by re-settler immigrants and locals were outside re-settlers move in.
Relocated talks about local migration and not cross-country “immigration.” It covers issues concerning moral rights in as much as innocent destruction of legal and moral rights of migrants is concerned. Two major instances are given in comparison to what happened in America when children born to Asians in USA started having the same rights to vote, etc., as citizenship is normally considered by country of birth.
And, later grandchildren of these initial landed immigrants to USA began taking life seriously and came up in life with the result that Americans were sidetracked in many types of jobs, which were “taken” by American born Indians or other Asians. This according to me happened because local Americans took life for granted and did not work as hard as the landed immigrants.
They also enjoyed cheap labour because the landed immigrants and their first generation accepted all work they could do, and for very less charges or salary. They had to survive. Their children remained normal, but their grandchildren began equating them with local American kids, and began competing with them.
At that time, Americans were not careful and took obedience of outside re-settlers for granted. Soon, when these originally Asians started getting jobs in America (as perfectly qualified candidates who heard the same songs of Elvis Presley as they “talked like American, walked like American, looked like American, but theyyyyyy were not, devil in disguise, yes they were, not, devil in disguise.” (Parody of 1963 song by Elvis Presley of Tupelo, Mississippi, “(You’re The) Devil in Disguise (You Look Like And Angel….).”
After three decades or more, Americans realized that grandchildren of landed immigrants have started ‘taking’ all lucrative and highly paid jobs. They studied a lot and became qualified. Worked hard and gained good reputation. Did not mess around with college girls so boys did not notice them when they were studying, and when they worked hard and accepted to do any work that was offered, they did not charge much for services rendered. Initially, Americans liked this tendency of their original Asians.
Later, problems started cropping up when American born children of Asians lot started comparing them with local Americans. There was nothing but pure resentment, anger, and utter helplessness because the Japanese, Chinese, Indians, Pakistanis, Arabians, and many others captured good businesses, and jobs.
Similar situation was historically repeated in Mumbai when local migrants form Gujarat, Uttar Pradesh and Bihar started flocking in Mumbai. This story discusses problems faced by locals when outside relocators invade their city for work and business. After discussing the situation of first local migrant in Mumbai, I have discussed the situation in Pune taking the year 2009 and the base. I have also quoted example of outside re-settlers in Moti Khawdi, near Jamnagar in Reliance Mega Project.
The unimaginable real estate escalation and sudden increase in salary and cost of freelance skilled workers such as carpenters, mechanic, painters, milk-man, daily wagers, tailors, plumber, drivers, mason, etc., was shocking and troublesome. When locals realized that outsiders moving in have money to spend, they began charging more. Cost of Evening Meal shot up by 200% and cost of taxis, autofare, hotels and all other things started increasing.
Concept of innocent destruction caused by the re-settlers is discussed. My basic premise is that it was ‘greed’ to earn more by doing ‘nothing’ that ruined the Jamnagar property owners, and Sumo Taxi owners, and not actions of Reliance Group. However, in all forms of relocation where the relocated brings in a lot of money, it is now clear that one section of society gain from re-settlers, whereas another faction loses or does not benefit at all by the advent of those who relocate for good.
Many human rights issues also arise when the relocated persons jam-packs everything including roads, and public utilities. This book does not have a legal base and it does not touch as many human rights issues, however, moral aspects are discussed.
The photograph on cover page is shot by my sister Mrs. Mitakshi Chandresh Dhebar. The photograph shows Inland Navigation in Bosphorus River in Istanbul, Turkey.

Author began assisting his father’s uncle in Supreme Court from 1979 onwards. He was enrolled as an Advocate with Bar Council of Delhi in 1982.
After qualifying as a lawyer, he obtained training for one full year under Mr. Pravin H. Parekh in 1982 – 1983. During this period, he was adequately grounded in legal drafting and courtroom appearances that included briefing and appearing with designated seniors (practicing in Supreme Court prior to 1980s, and thereafter). He appeared in many cases in Supreme Court, MRTP Commission (as it then was), CAT, Customs and Excise Tribunal, Consumer Courts, PF Criminal Cases, and other Tribunals. Major part of work area continued to be drafting and appearances in the Supreme Court.
On and from 1983, the author began independent law practice at the Supreme Court Bar filing matters through his father’s uncle Sri K. L. Hathi, Advocate On Record. From 1982 until date, the author is enriched with wide and varied experience in academics, legal research, corporate legalities, courtroom appearances in Supreme Court, and acting as a Counselor.
For two successive years from 1986, the author was elected by popular vote as Member, Executive Committee, Supreme Court Bar Association. He completed reading for LLM in 1989 (one year course) from the University of Georgia, Athens, GA, USA. He studied environmental laws, contracts, potentially strategic and militarily critical technology transfer law, international law, and mainly (Thesis based) International Franchising.
The author had rented a red brick house on a hill top upstream Oconee River in Clark County, Athens, Georgia and he lived there with a Tanzanian room partner who was reading for a non degree course (Law of Sea) from the same Law School.
During earlier visit to USA and after completing LLM, the author visited many States in America, and few parts of Mexico. Because of help from Chhaya Clan members in USA, he could visit many locations and other wildlife sites were covered on his own.
The author made good friends during his visits to foreign countries. He spent good time in England, Wales, and nearby locations. Many friends in these regions are still in touch. However, all friends from the “age of toddler” until LL.B. (Delhi) have maintained contact with the author until date.
During school and college days the author led very active sports oriented life (Archery, Shooting, Basket Ball, Foot Ball, and doing good exercises with friends every day). On account of deeper interest in wildlife, the author has widely travelled many wildlife locations in many countries.

Showing 1 out of 1
sureshkumartamada 8 years, 2 months ago

It is quite good.
Hope to see more of your writings.
It is serene and relaxing, but then the actual problems are understood by the strength of the portrayal.

Around The Corner
Ranjeet Adkar