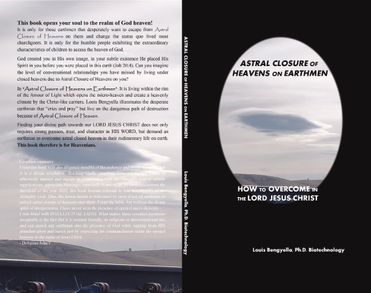 How to overcome in Jesus Christ

In Astral Closure of Heavens on Earthmen, Dr. Bengyella declares, “Opened micro-heavens on earthmen in all the enclaves in the Blood of Jesus Christ”.

This book is for “heavenians” willing to thrive on the abundant spirit of Elijah and Moses poured out graciously in love for Christ-like earthmen to open micro-heavens, war, and win spiritual battles in an era where the earth is invaded by humanoids operating under closed heavens.

Stagnation and perpetual omens of setback are signatures of Astral Closure of Heavens on Earthmen faced by a majority of souls that love the Lord Jesus Christ. On the scale of existence, earthmen face an existential threat in the wake of the humanoid invasion in 2020. Several spiritual afflictions viz.,
• Genocidal disease
• Deception, divorce, and cancel culture
• Illusionism and new age
• Corrupt biotech food from other realms
• Oppression and socialism
• Racism and corruption
• Greed and power abuses are sample tools used by humanoid agents to encapsulate earthmen under closed heavens and eternal damnation.

Arrested and visited by the Lord Jesus Christ Himself, Bengyella lay down the fundamentals of living under the opened micro-heavens as a divine gift during this period of earth invasion by humanoid races. This invasion will trigger God to shake this earth like never before beginning in 2021.

In this compassionate, visionary, and powerful book, Bengyella weaves together hidden biblical truths on opened micro-heavens and unlocks insightful principles to overcome the Astral Closure of the Heavens on Earthmen which impede heavenly communion for Christ-like men.

Dr. Louis Bengyella is a husband, and father of kids arrested by the Lord Jesus Christ. He is an alumnus of the World Academy of Sciences and the Department of Biotechnology, Government of India. He received a Ph.D. in Biotechnology with a focus on plant-pathogen proteomics at the University of Burdwan, India. Bengyella arrest by the Lord Jesus Christ has provided many opportunities for him to give back to earthmen living under closed-heavens and bondage

Astral closure of heavens on earthmen

This is a great spiritual book that should be read by every true follower of Jesus Christ in this generation.