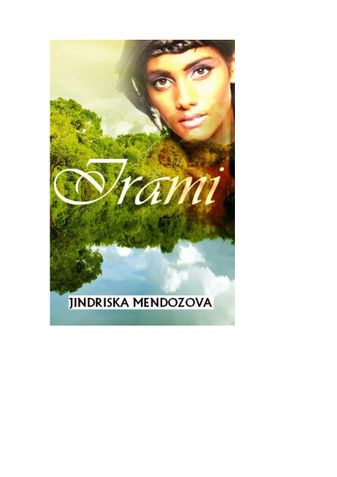 Irami is a novel that focuses on young adult as well as on women readers who like adventure, legends, exotic, mystery and romance - this all in one.

I lived in Ecuador for more than three years and I knew there a lot of different and very interesting myths and legend. One of them was about Amazons, a tribe of women warriors. No one knows they're only myth or they're really live in a deep and dangerous jungle. Young Madrid lawyer, Manuel, will try to discover this secret. During his journey to the Amazon jungle he will face difficult situations that will force him to face even a death.

However, also those who love romance will find a theme interesting for them in the book. There are two heroines, Luz from Madrid and Irami from Amazonian jungle, who will provoke Manuel to think about what the real love is. And where he can find this real love.
In my novel I try to combine the ancient legend with a today's modern history.

I would like my readers share the opinion that ancient myths and legends have a lot to say also today, in our modern times.

I am TV and film screenwriter and journalist with 20 and 14 years of experience, respectively. I have been working as Spanish-Czech and English-Czech translator since 1998. I have strong experience as fiction and non-fiction story liner and idea developer for the radio, TV serials and TV children programmes. I have been involved as story liner in 5 long-term TV serials to private Czech TVs and radio and more than 5 long-term and 5-episode drama and sit-com TV serials for different international European production companies. I have outstanding proficiency level in English, Czech and Spanish languages. I am author of 100+ original articles to different top Czech magazines and four novels for adults and children in Spanish and Czech languages. I got awards as a writer of short stories for children in USA contests.
You can find me on:
www.facebook.com/IramiJMendoza
www.goodreads.com/author/show/6527963.Jindriska_Mendozov_

Showing 1 out of 1
JindriskaM 9 years, 7 months ago

Review on www.kirkusreviews.com
TITLE INFORMATION
IRAMI
Mendozova, Jindriska
AuthorHouseUK (112 pp.)
$15.18 paperback, $3.99 e-book
ISBN: 978-1468582710; June 27, 2012
BOOK REVIEW
Mendozova offers a slim, fairy-tale-like story of love in the Amazon.
Upon graduating law school in Spain, Manuel Castro’s parents gave him the gift of two months travel in Ecuador and the
wild beyond. Manuel had become captivated by “the mysterious kingdom of the tribes of female warriors—the
Amazons.” He hires a guide, Jose, who wants little more than to mug his client at the first opportunity but chooses the
wrong moment; the jungle might have seemed to be a good spot to cold-cock Manuel, yet Amazons lurked and captured
both men. Mendozova swings the story between the days in the jungle and Manuel’s kindling love for Irami, queen of
the Amazons, and Manuel’s intended back home in Madrid, Luz, who has her eye on Fernando rather than her wayward
boyfriend. The strongest writing describes the various locales: chugging down the river on a raft, parrots squawking in a
jungle of every known shade of green or sipping orange juice in the mansion of Manuel’s parents. Episodes on both sides
of the ocean slide together snugly with no sense of hurry. There are awkward pieces of writing—“ ‘So Manuel called
you?’ Teresa asked, or rather concluded, excitedly.” and an occasional flatness of delivery: “Manuel was already able to
recognise some of the sounds and to correctly determine their origins. But there were others that he had no idea where
they came from or who made them.” And though detail is one of Mendozova’s strong suits, sometimes it gets the better
of her; that orange juice was served in “elegant, slightly red-tinted, large, thick-walled glasses.” What keeps the story
buzzing is the strength of characterization, principally for Irami and Manuel, though also for the bustling lives of the
secondary figures.
An ethereal, atmospheric, occasionally clumsy tale that’s over before you know it.
Kirkus Indie, Kirkus Media LLC, 6411 Burleson Rd., Austin, TX 78744
indie@kirkusreviews.com

Other Books in Teens

The Night of Horror
Sukriti Jaswal

You Don't Own Me
Uhan Barman