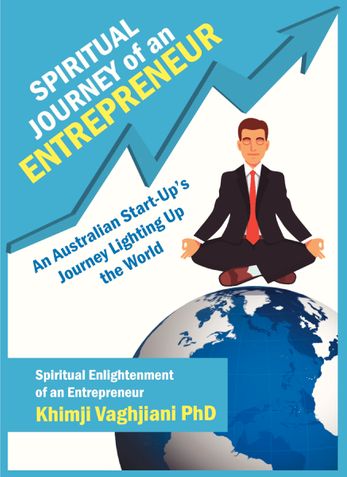 Spiritual Journey of an Entreprenuer (eBook)

This book depicts the journey of an entrepreneur who dreamt big. An entrepreneur who took a risk by not enjoying the prospect of a regular income for what he thought was a worthwhile cause, and that was to make a difference in people’s lives. In the process and quite by coincidence, he found a new way of life that was more than just a great experience in the business and entrepreneurial sense; it provided spiritual enlightenment.
What can you learn from this experience?

The book is a timeline account in many ways but it also highlights the major issues and challenges, opportunities, and actions that were taken during my entrepreneurial journey. Each chapter is an account of what we did, what we learned, and the issues that were faced during this journey.
The book may help budding entrepreneurs to test their mettle by answering a few targeted questions. The sections can be tailored into a course and divided into separate exercises or lessons in entrepreneurship. I believe that through this book and the experiences in it, you can learn what to focus on during your exciting entrepreneurial journey to have the best chance of success. A well-respected venture capitalist who I worked with said, “There are a few more entrepreneurial ventures left in you” and “You have learned so much” that I intend to use this book for my next venture not only as a guide, but as an inspiration, and later as a course on entrepreneurship.

My idea was to develop an inexpensive, renewable powered lighting system which would bring light to approximately 1.6 billion of the world’s population who currently have to struggle in the dark. My journey took me around the globe, provided recognition, and several business awards. In the end, we broke even financially, but there were many other public and personal rewards that were very important in the greater scheme of life.
Before my journey started, I saw entrepreneurs develop and grow great businesses and I wanted to do this. I wanted to make a difference. At the same time, as part of making a difference, I wanted to plan for my retirement, i.e., make money. Well, in hindsight, I think making a difference in people’s lives was achieved; making money might be for another day and another venture. I had heard that in Silicon Valley, they say you need to have two businesses to make the third one a success; this depends on how you look at success and whether the measure is financial or something else.
Well, my measure is learning, achieving things that I may not have achieved or learnt while working as an executive in a large corporation and making a difference to people’s lives – for me, this defines a great success.
We developed an idea to ‘light up lives’ – to bring light to approximately 1.6 billion of the world’s population who had never had light in the conventional sense we see in the West. This journey that I embarked on took me around the globe, from the US, the Middle East, and the Indian subcontinent to the rest of Asia and parts of Australia. I would present to investor forums such as the highly regarded Sydney Angels or to individual investors at the other end of the City of Sydney. I would run from meeting to meeting talking to potential customers and run to another meeting the next day at a puff of a sale or an investment opportunity.
I was privileged to be part of a team which was highly experienced and offered the joy of learning, but at times we were not immune from frustration. We embarked on testing our innovative and entrepreneurial ideas in the country I was born in and had traveled extensively in.
Before a set of trials in India in December 2010, I had made three trips to India in the space of three months before arriving back in Sydney; my visa had run out and hence I had to reapply before I departed for India again. On the second trip, I had to present at the Australian High Commission as part of the Australia Unlimited function during the Commonwealth Games in New Delhi, go back to Sydney and then go off again for the trials in December 2010. It was a roller coaster ride, on and off the place, presenting here and there.
Previously, during the same year, I had traveled to the US and won the Australian Innovator of the year in San Francisco as part of the G’Day USA annual event and went to meet investors at Sand Hill Road in Silicon Valley, the bastion of investors in the world. Also in the year 2010, Solar-Gem picked up the Australian International Design Awards and the Australian Powerhouse Museum Innovations Award, and the NSW Government Tech23 innovative company award. At the same time, we raised capital here in Sydney and India, made some sales and were frustrated due to the GFC. I had traveled to Thailand on my way to India to meet a range of potential clients.
The thrill of presenting your passion in front of potential investors was exciting. I had heard so much about this ritual, that it was an amazing feeling. I had the frustration of presenting to potential investors who thought I was such a nice and innovative guy but had no money to spare for my venture. I picked myself up and went somewhere else. Somehow, I forgot there was a GFC on while I had started my entrepreneurial venture.
However, while slightly balding and grey haired, the experiences I’m talking about in this book is of a four-year roller coaster ride, serious adrenalin rush, excitement, disappointment, wins, losses, frustrations, and memories, good and instructive, and spiritual enlightenment. However, I never gave up. Tenacity and perseverance had been hallmarks and key attributes; without these, I may not have had the drive to succeed in the business or write this book and share my journey with other budding ‘wannabe entrepreneurs’.
I believe that through this book and the experiences in it, I can shed light on what to look out for when starting a start-up, and also what to focus on and address during your exciting entrepreneurial journey. I know that I will certainly apply much of the learning presented in this book for my next entrepreneurial endeavor.
I hope this book will give entrepreneurs a sense of whether ‘your baby is ugly’. It should be a test to see if your venture will really fly!
Our off-grid solar powered smart energy system passed the ‘your baby is ugly’ stage in many ways but struggled as it grew up. It faced many barriers, yet it was reported in 2013 that as many as 75% of start-ups fail in the first two years. We carried on for over four years and still had money in the bank account, i.e., in the company’s account not mine!

The Ancient Indian art of Management - the Vidurneeti

To add a little twist to this journey, I have included an ancient Indian scripture that I had been a great fan of – the ’Vidurneeti’, an ancient Indian text on the art of management that was developed or spoken by Vidurji, the Prime Minister of India in approximately 5000 BC. This was an extract of the proceedings of war between good and evil, and Vidurji spoke his divine words, which would for centuries be revered. Over the years, I have been so intrigued by this scripture, that I have spent the last decade and a half reading snippets of it over and over again. Not only did I find many of the sayings in this scripture to be true to the way you run a business or a start-up, but its findings actually developed a sense of spiritual upliftment within myself and enlightened me on my journey as an entrepreneur.
The start-up journey was special in its own right, but spiritual enlightenment is something many entrepreneurs fail to identify with. They only see the positive aspects of making money or the negative impacts of losing out on a successful start-up. However, for me, the most exciting part was the spiritual journey I experienced. I will forever be ‘spiritually enlightened’ by my entrepreneurial journey. Throughout this book, I highlight similarities with Western business practices and my own journey while running Solar-Gem with that of what Vidurneeti has to offer. This is not only an entrepreneurial journey as described in many other books, but one that brings together Western and Eastern ideologies and one that could add another element and dimension of knowledge while starting a new venture. In many ways, it is an attempt to do what Dr. Deepak Chopra has done over the last decade. He combined Western thinking and Eastern text, and this has benefitted many people around the world. I don’t know if I can replicate his achievements for Dr. Chopra is one of a kind, but I can at least attempt to provide my version of what I think the Eastern ways can provide to the West, through the ancient wisdom of Vidurneeti.
After reading this book, I hope you too can learn to test if your baby is ugly and develop an exciting entrepreneurial business. At the same time, I hope that you become spiritually enlightened and see for yourself that life is not only about making money. Your soul has a journey which it needs to follow and you need to follow the prescribed path, whether it is full of roses or not– there are benefits. It just depends on how you shape your journey.

In addition, there are numerous lessons, which I have learned along the way. These have been highlighted for readers to ponder over.

Good luck with your entrepreneurial journey!

An entrepreneur who stumbled over an ancient Indian management and spiritual text and took the learning's to improve spiritually in his life.