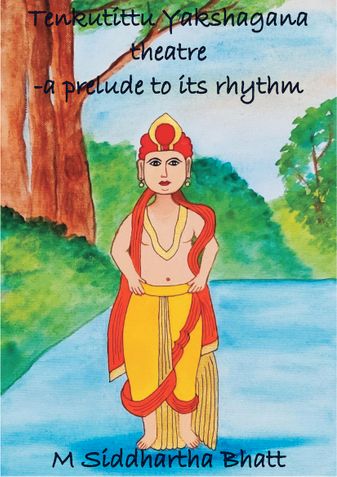 This book aims at portraying an introductory framework of this traditional Indian theatre form, its history, structure, elements of its music, components, and their interactions, with a focus on performatics- the transformation of the dramatic text into a performance. This book is intended to be a prelude to my forthcoming book on the rhythm of Tenkutittu chende- the vertical drum popularly known as the Asura vadya.

The first Chapter presents an introduction of what is Yakshagana, its origin, etymology, historical origin, influences of other arts, forms and formats, and people who mattered in the course of its evolution in the last century.

The second Chapter dwells on the performatics of Yakshagana. Understanding Yakshagana better requires knowledge of the basics of theatre, Natya Shastra, the Indian theatre and theatrical production. Technical aspects covered are structure, oral tradition, dramatic text, themes, lingual media, plot, enacting time, troupe size, calendar of event and economic model. The components of Yakshagana are covered in the third Chapter which include the story-line, characters, sequence of events, songs, abhinaya (communication), rhythm, dialogue, percussion, costumes and supporting gear, directing, enacting stage and tala maddale (the oral form). The concept of semiosis is also elaborated.
The fourth chapter deals with facets and issues associated with this artform in its long history. The historical perspective giving the life of artists 50 years back and earlier, health and occupational hazards, welfare measures, technical support, research, and training; issues beyond the world of Yakshagana; and change and outlook are discussed in this chapter.
The fifth chapter is about melody and rhythm of Yakshagana. This chapter covers a historical perspective of Indian music, Indian ragas, distinctive features of Yakshagana music vis-à-vis Karnatic music which covers in detail almost twenty different characteristics. The Yakshagana talas are also described briefly.
The rest of the chapters, viz., Chapter 6 to 11 are in the form of annexures as these are more in the nature of catalogues and archiving, rather than running material, except in the case of the Annexure 1 (Chapter 6) on shruti (operational pitch). This Annexure covers almost 13 different items including shruti, musical scales and ranges of pitches, melody and harmony, ranges of musical scales, ansha swara for musical synchronization of the ensemble, translocation, consonance, and voice synchronization. The Annexure 2 (Chapter 7) attempts to list the dance-drama forms of India, Annex 3 (Ch. 8) gives almost the entire list of ragas used in Yakshagana music with their primary tune signatures. Annex 4 (Ch. 9) gives a list of the dramatic texts (prasangas) and their uttarangas (second halves) to hint at their meaning. Annex 5 (Ch. 10) gives a list of the troupes (melas and mandalis) and Annex 6 (Ch. 11) brings out a glossary of terminologies relevant to this artform, in vernacular.
The book contains around 70 Figures, 42 Tables, and 3 Equations. Besides there are around 70 pictorial illustrations. The book contains around 240 references and around 1400 meanings of vernacular terms.

M Siddhartha Bhatt (b. 1956), musicologist and percussionist, hails from Mangalore and settled in Bengaluru, has a long experience in art of mridanga and Tenkutittu chende. He is one of the few surviving students of Mridangam Maestro C K Aiyamani Iyer (1908-1976) of the Palghat stream of Karnatic percussion.

Highly Informative book. Recommended for all yakshagana knowledge seekers. Thanks to the author Shri Siddhartha Bhatt

This book gives a new perspective to yakshagana. Must read for all Scholars and enthusiasts.

Other Books in Performing Arts

The Art How To Make Money Fast
P. T. Barnum