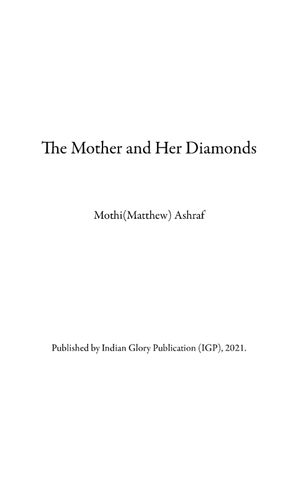 The Mother (India) and Her Diamonds (eBook)

A book for Indian patriotism.

In the early 16th century, northern India, then under mainly Muslim rulers, fell again to the superior mobility and firepower of a new generation of Central Asian warriors. The resulting Mughal Empire did not stamp out the local societies it came to rule. Instead, it balanced and pacified them through new administrative practices and diverse and inclusive ruling elites, leading to more systematic, centralised, and uniform rule. Eschewing tribal bonds and Islamic identity, especially under Akbar, the Mughals united their far-flung realms through loyalty, expressed through a Persianised culture, to an emperor who had near-divine status. The Mughal state’s economic policies, deriving most revenues from agriculture and mandating that taxes be paid in the well-regulated silver currency, caused peasants and artisans to enter larger markets. The relative peace maintained by the empire during much of the 17th century was a factor in India’s economic expansion, resulting in greater patronage of painting, literary forms, textiles, and architecture. Newly coherent social groups in northern and western India, such as the Marathas, the Rajputs, and the Sikhs, gained military and governing ambitions during Mughal rule, which, through collaboration or adversity, gave them both recognition and military experience. Expanding commerce during Mughal rule gave rise to new Indian commercial and political elites along the coasts of southern and eastern India. As the empire disintegrated, many among these elites were able to seek and control their own affairs.

By the early 18th century, with the lines between commercial and political dominance being increasingly blurred, a number of European trading companies, including the English East India Company, had established coastal outposts. The East India Company’s control of the seas, greater resources, and more advanced military training and technology led it to increasingly flex its military muscle and caused it to become attractive to a portion of the Indian elite; these factors were crucial in allowing the company to gain control over the Bengal region by 1765 and sideline the other European companies. Its further access to the riches of Bengal and the subsequent increased strength and size of its army enabled it to annexe or subdue most of India by the 1820s. India was then no longer exporting manufactured goods as it long had, but was instead supplying the British Empire with raw materials. Many historians consider this to be the onset of India’s colonial period. By this time, with its economic power severely curtailed by the British parliament and having effectively been made an arm of British administration, the company began more consciously to enter non-economic arenas like education, social reform, and culture.

A writer , publisher and singer.

The Mother (India) and Her Diamonds

Showing 1 out of 1
Mothi Matthew Ashraf 1 year, 8 months ago

Great book. It is contained beautiful technical and inspirational speech.

Where are we going
Nitish Joshi