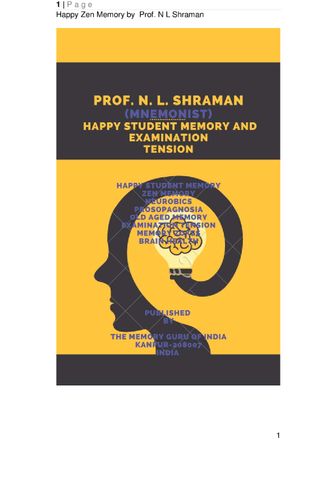 This book is for memory development from student to old aged containing the following parts.

You can become a master of your memory from student life.

The Memory Guru of India, one the the top 20 Mnemonist of the World as per Wikipedia ( 15th April, 1952) was born in a village named Terwa, situated in the mango green belt of Malihabad a Tehsil in the District of Lucknow, Uttar Pradesh, India. He was born and brought up in a farmers family. His original name was Nand Lal. At the age of 10 he learned English, Hindi, Urdu and Sanskrit.
His interest was to learn and memorize all books of his class as well as famous religious books of Hindu religion like Ramayana, Mahabharata, Sri madbhagwatgita etc. He learned Palmistry and Astrology in his childhood and become famous as "Pandit". Villagers approaches him to solve their problems and know their future. His class-mates often engage him to know their future and carrier. He was very much interested in Mathematics and always acquired full marks in examinations. He always topped in his class and stood first. He was awarded many times with certificates and medals. His Primary education up to fifth class was completed in a primary school located in a nearby village named Kaithulia. He passed VIIIth standard from Rahimabad a place known for weekly markets and commercial center at a distance of two kilometers from his residence. He studied from 10 th class to 12th class in Government Jubilee Inter College, Lucknow, a district headquarter in the state of Uttar Pradesh India. Memory Guru Graduated from Chandra Shekhar Azad University of Agriculture and Technology, Kanpur, popularily known ad "Patthar College" means college of stones as it was built up with red stones. He was admitted for Master Degree in Genetics and Plant Breeding in the year 1975. In 1996 he left University and joined an Indian Nationalized Bank in the cadre of an Officer.
Memory Guru was always interested to make the things easy to be memorize. In the era of Information Technology explosion there was a lot to be learned not only by the students but also by the professionals. This attracted and forced to Memory Guru to devise and engineer a system to memorize anything in a very short time for long memory.
He started working on the memory and mental math day and night to make systems especially for Indian students and professionals. Memory guru has written large number of lessons on mental memory and mental math in Hindi and English. He has written number of books on memory development and mental math. One of his famous book is Bhoolana Bhool Jaoge in Hindi.
He had been awarded best writers award by Google Knol (now portal closed by Google). Since he worked on memory in his major part of his life, he became famous as The Memory Guru of India. He is also called as "Shraman" as he learned from Buddha. Since he is teacher, trainer, instructor, poet, motivator, inventor, people also call him Professor N. L. Shraman and his nick name as The memory Guru of India. His website is http://unlimitedmemory.tripod.com . Send mail nlshraman@yahoo.co.in

An Organic Whole of All & Everything
Mohan Vaishnav

How to Avoid Tensions and Achieve Peace in ...
Pritis C Majumdar