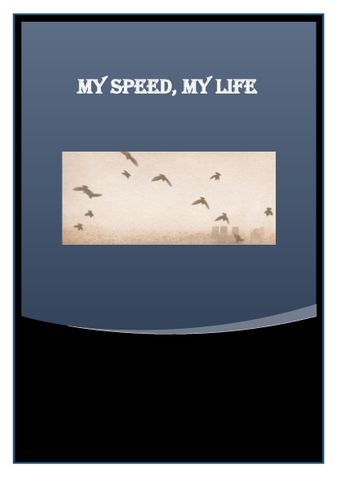 My Speed My Life (eBook)

The book ‘ My Speed My Life ’is a story which narrates the life and challenges of an Insurance sales guy and how he overcomes them to become a successful business leader. The book travels though various stages starting from the Interview where Ravi gets selected as a front line sales executive to first a successful Business and then a political leader.

Ravi and his peers are youngsters of today’s generation. The book describes life in corporate, the way it functions and the challenges people face. It throws light on the contests which run in corporate like foreign trips, and parties on achievement of sales targets. There are two separate chapters in a book which are on a trip to Thailand and F1 race respectively. I have tried to write on a platform on which the youngsters of today’s generation can relate to. It is an energetic story which has a public message in most of the chapters.

Ravi’s love to his girlfriend Tanya, is also an Integral part of the story. Ravi’s girlfriend and eventually his wife, Tanya acts as the biggest support to him, not only in his personal life but also in his professional life by finally handling all the businesses which were initially started by him.

The book describes various stages of Ravi’s career right from a front line sales executive who grows fast in his job, starts his venture which becomes the biggest in its space, to a successful business leader and a motivational speaker, And Finally a political leader. It shows that how at various stages, Ravi faced the challenges in his career and the way he tackled them. He step by step fulfils all of his three aspirations of Power, Fame & Money.

The public message what I have tried to spread by taking Ravi as a medium is to dream big and go all out to make those dreams come true. Look for alternate ways to overcome challenges and make a mark for yourself. Every Individual should be successful in his or her respective assignment and sometime in life should proudly say ‘ My Speed My Life’.

Punit Chopra, a resident of NCR is a Life Insurance Professional. He did his schooling from Dehradun, graduated from Delhi University followed by an executive programme from IIM,kozhikode. He had a great career in his initial phase of life and was on a sabbatical after completing 10 years tenure in Life insurance distribution with his last assignment as AVP with one of the leading life insurance companies, when he chose to write this book. Punit had a passion for sales. He always wanted to reach CXO levels fast travelling and excelling through the sales distribution route in an organisation. It was Punit’s ambition to write. He wanted to write something meaningful and which carries a strong Public Message.

My Speed My Life

Re: My Speed My Life (eBook)

So couple of days ago I read the <a href="https://www.essayuniverse.net/rushmyessay-review/">rushmyessay review</a> about the book and I just knew that I had to read it. It met my expectations as it was really well written and also interesting.

Other Books in Self-Improvement, Job & Career