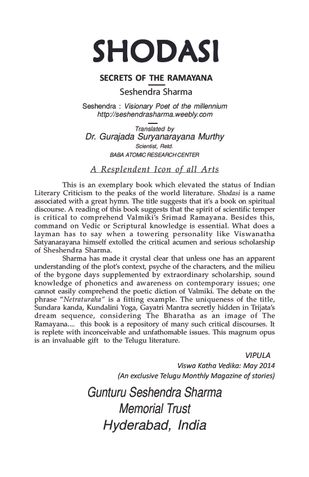 Secrets of the Ramayana

This is a path breaking work on the Ramayana . This book unravels the secrets hidden deep in the soul of The Rishi Valmiki since times immemorial. On n the surface if it , the Ramayana is beautiful poetry . But hidden in it are breathtaking secrets of Kundali Yoga , Gayatri Mantra etc

Seshendra Sharma better known as Seshendra is a colossus of modern Indian Poetry . His literature is a unique blend of the best of poetry and poetics. He was recipient of the Central Sahitya Akademi award for his Kaala Rekha ( Arc of Time ) , essays of comparative literature. He was this Akademi's Fellow during his life time , the highest honor in Indian Literature , reserved for "The Immortals of Literature". His magnum opus "My Country - My People : Modern Indian Epic "was nominated for Nobel in 2004

A Resplendent Icon of all Arts

This is an exemplary book which elevated the status of Indian Literary Criticism to the peaks of the world literature. Shodasi is a name associated with a great hymn. The title suggests that it’s a book on spiritual discourse. A reading of this book suggests that the spirit of scientific temper is critical to comprehend Valmiki’s Srimad Ramayana. Besides this, command on Vedic or Scriptural knowledge is essential. What does a layman has to say when a towering personality like Viswanatha Satyanarayana himself extolled the critical acumen and serious scholarship of Seshendra Sharma.

Sharma has made it crystal clear that unless one has an apparent understanding of the plot’s context, psyche of the characters, and the milieu of the bygone days supplemented by extraordinary scholarship, sound knowledge of phonetics and awareness on contemporary issues; one cannot easily comprehend the poetic diction of Valmiki. The debate on the phrase “Netraturaha” is a fitting example. The uniqueness of the title, Sundara kanda, Kundalini Yoga, Gayatri Mantra secretly hidden in Trijata’s dream sequence, considering The Bharatha as an image of The Ramayana.... this book is a repository of many such critical discourses. It is replete with inconceivable and unfathomable issues. This magnum opus is an invaluable gift to the Telugu literature.

The story of Ramayana is prescribed as textbook for students. Sita and Rama are worshiped as prime couple. No need to mention about reciting it. Whether Valmiki was satisfied with simple narration of the story? Seshendra Sharma denies it.

He analyzed it mentioning that to understand the inner meanings of Valmiki Ramayana, the scientific knowledge is essential.

The underlying secret of the sage’s mind will be known through the knowledge of science.

It is the firm opinion of Seshendra that the argument that “the sciences are for scholars only” is a conspiracy hatched by Selfish scholars and lazy uneducated persons.

Seshendra who has democratic ideology and conviction on science and literature informs the public about the secrets of Ramayana expounded by Valmiki. He explains that Valmiki dedicated ambrosia (The Greatest Medicine) named “Kundalini Yoga” to the mankind. The poetry in the metre of Anushtup Sloka is the honey coating to the medicine. It was explained with great introspection and exemplary scholarship. He concludes that the Ramayana is older than the Maha Bharatha and it is another form of Veda. Valmiki introduced the system of meditation in Ramayana. The Introspection and research bent of mind of Seshendra are spread over in the book in two streams. The exuberant fragrance of scholarship is experienced throughout the book.

The present generation can understand the scholarship of Seshendra in Vedas and Mantra Sastra. Seshendra is a poet who has composed unique Ruthu Ghosha (Cry of the Seasons: Metrical Poetry) and revolutionary free verse –Mande Suryudu (The Burning Sun).

Two Great Peaks in the world literary criticism and research

Shodasi: Secrets of The Ramayana and Swarnahamsa Harshanaishada from the mighty pen of the great Telugu poet, Gunturu Seshendra Sharma are considered to be the two great peaks in the world literary criticism and research. This is a truth most contemporary Telugu writers and readers aren’t aware of. The way Seshendra could discover Kundalini Yoga, Gayathri Mantra in Shodasi, he could discern the treasure trove of mantra yoga, Sri Mahatripurasundari, Chintamani mantra in Swarnahamsa.

At a time when our universities which are mere Degrees production Units, churn out “solid waste” in the name of research; Seshendra even while attending to his job as a Municipal Commissioner created research oriented critical volumes like a sage.

Though Shodasi was published in 1967 and Swarnahamsa in 1968; Swarnahamsa was created by him much before Shodasi was conceived. The concepts that Srinatha, Nannayya and Mallanatha, the Telugu Classical poets couldn’t decipher,
Seshendra could. He humbly submits that he is most fortunate that the triumvirate had left behind some pertinent concepts only to be discovered by him at a later stage.

These two great kavyas were serialised under the editorship of late Neelamraju Venkata Seshaiah in Andhra Prabha Daily, Sunday Literary Supplements from 1963 to 1967 and Seshendra’s poems and non-fiction were published in the book forms (6) only after they appeared in serial form in Andhra Prabha.
-----