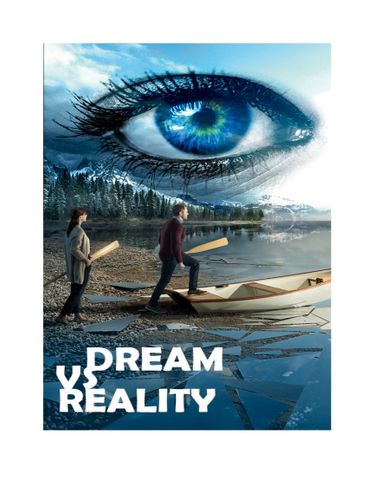 The dream is a form of involuntary imagery containing unconscious material and subconscious expression consisting of a succession of images, sounds, ideas, emotions and other sensations that usually occur during sleep, but especially in the case of sleep in which eyes move (paradoxical sleep / REM – “rapid eye movement”).

Cognitive capacities, such as thinking and memory, are secondary, the person sleeping psychically and emotionally perceiving the events in the dream as real elements. There is a branch of psychology that deals with the study of sleeping dreams. It has been noticed that on average, a human spends about six years of living dreaming (which corresponds to an average of 2 hours per night). It has not yet been discovered which portion of the brain generates dreams, whether there is only one region in the brain that generates them, whether more involved or what is really the purpose of dreams. During REM sleep (paradoxical), the release of certain neurotransmitters is completely suppressed.

As a result, motor neurons are not stimulated, a condition known as nervous relaxation. This relaxation suppresses the uncontrolled movement of the body during sleep and occurs, often in the case of nightmares, the feeling of paralysis, helplessness.

Dream events are most often impossible or very unlikely in physical reality in the waking state, being simultaneously beyond the control of the person who dreams. The only knows exception the dream knows as lucid dream, where dreamers are aware that they are dreaming and can control the various aspects of the dream, including the dream environment. In a lucid dream, the environment is often more realistic and the sensory accuracy is higher than in ordinary dreams. Besides lucid dreams, there are also premonitory dreams that are some kind of deja-vu.
Synergistically, a dream is an activity of the brain during sleep. Experts who have analyzed the dream phenomenon have the same conclusion: Dreaming is a phenomenon of unconsciousness and sub-consciousness that occurs in certain stages of sleep (called REM – rapid eye movement) and in which a person perceives sensations (tactile, auditory, visual) as though it were conscious (awake). Through this, the dream demonstrates the very strong bond between body and soul. Sometimes, brain activity is so intense that it can move parts of the body through various sounds, bruises or even sleepwalking. At other times, it seems that the subject can control the dream world, and the dream may seem real. Specialists are still studying the link between dream and REM.

Dreams are a kind of a digestive system of the brain, which is very much connected to its conscious activity. Dream information always relates to information processed in a conscious state, regardless of their awareness. There are studies that seek the link between the content of a dream and the emotional footprint of the various information received in real life. Sometimes, a simple idea over the day gives you a dream, sometimes stress or a difficult situation are sources of a dream. The fact is that the dream also leaves emotional impressions on the dreamers: beautiful dreams generate a good mood and bad dreams generate negative states.

PATIENCE is a virtue, learn to develop patience
Sanjay Gupta