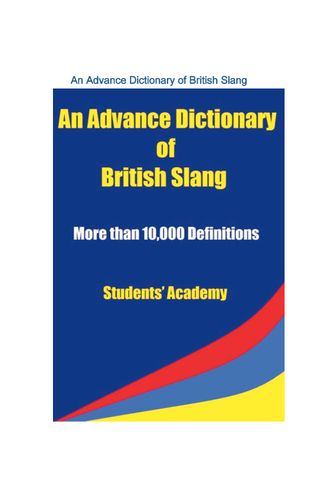 An Advance Dictionary of British Slang

Simply defined, slang means colloquial language. It is a kind of crude language that is slightly spoiled from the main language. Slang words are not used in formal language.

Slang words or expressions differ from region to region. A non-native speaker who only understands formal language finds it very difficult to understand slang words and expressions.

The following slang expressions will make it easy for you to understand what exactly slang is:

He is chuffed to bits! (He is quite pleased.)

That woman is such a chav. (She is such a lower-class person.)

Fancy a cuppa? (Would you like to have some tea?)

It is manky. (It is disgusting or dirty.)

He has dropped a clanger. (He has made an embarrassing mistake.)

These examples may have given you a rough idea of the slang language. We provide meaning, definition, and explanations for thousands of slang words and expressions in this dictionary.

An Advance Dictionary of British Slang

It is really very useful if you are a student of English literature. I recommend that every school and college student download this dictionary. There are more than ten thousand entries in this dictionary! It is really worth buying!

How to Calculate The nth root of a ...
Babu Lal Saini