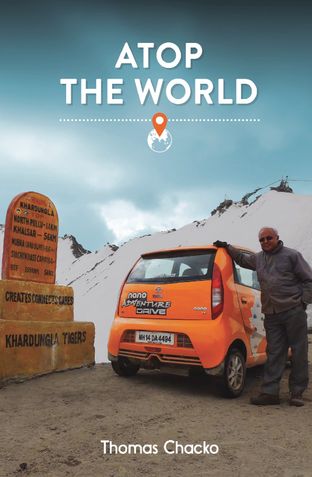 Atop the World (eBook)

Atop the World is Thomas Chacko’s first-hand account of the epic 80 day, 26500 km record-breaking journey that he undertook across India at the age of 63, to every state capital, the four corners of the country, and to Khardung La, which at 18,380 ft is the highest motorable mountain pass in the world. Such a venture had never been undertaken by anyone, let alone in a Tata Nano, the smallest car in current production in the world. That the author is a senior citizen makes the trip even more incredible, and serves as a great inspiration to anyone interested in adventure. It is a must-read for anyone who wishes to know more about this vast nation, and especially those who would like to discover its treasures by travelling through the country.

71-year-old Thomas Chacko is the author of published novel 'Without a City Wall', a historical novel set in 16th century Europe and South India, and co-author and producer of 'Forest Gold – The Story of South Indian Tea', brought out for the United Planters Association of South India. He was runner up in eAuthor 5.0, an all-India short story writing competition organised by the Oxford Bookstore, co-sponsored by the Reader’s Digest and Harper Collins. He has also authored On the Road Again, the story of his attempt to drive his car around the world.

A former motorcycle champion at the Calcutta Motor Sports Club, Thomas is keen on motorsports, and loves travel. He has driven all over India and has, to date, visited 45 foreign countries, and has driven cars in 34 of them. A fellow of the Institute of Company Secretaries of India, he is presently in practice in Cochin.

This is a readable book, with an engaging narrative. It is a story of how Thomas Chacko did a 26,500 km journey all over the country, in a Nano car in 2012.

Chacko recounts the various stages of the journey: the couple of minor accidents, types of meals he had, the different types of roads he traversed on, the traffic jams, the rude as well as the co-operative drivers, hot, cool, and cold weather, lunches and dinners with friends, and strangers, and the eminent.

General JJ Singh, the former Chief of the Army Staff of India, and the governor of Arunachal Pradesh provided a sumptuous feast. Chacko revisited the St. Paul 's Cathedral, in Kolkata, where he got married, as well as his traversing the highest motorable pass in the world: the Khardung La, at 18,380 feet. Asked about his biggest achievement, Chacko says, “Taking a tiny car to Khardung-la.”

As for the topography, he says, “We have beaches, mountains, hills, forests, deserts, swamps and canyons. India is unique."

Other Books in Travel, Sports & Adventure

Unlucky to too Lucky
Pawan Tailor

113 Things To See And Do In Edinburgh
Herbert Howard