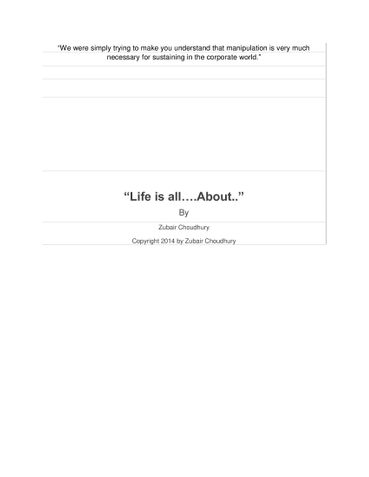 Life is All About (eBook)

This is a sweet and simple Novel named “Life is All About”, plot and sentences are short so that everybody can understand easily, possible easy and simple words are used. Satirical representation and criticization of many situation of life that comes on the way of an individual and effects common man like social imbalances, injustice, dirty politics etc. Small and short comedy dialogs are the main characteristics which anyone can enjoy.

Novel starts suddenly because the author’s life is not planned itself; he is thinking to write something but does not know what.. One day one of his friends presents a gift “2 states” of Chetan Bhagat, which inspires him to write this novel.

Inayat, the main character of this novel, a simple boy belongs to a low middle class family and by religion Islam, hailed from a remote village of North East region Assam, starts his life with boarding school and indulges in sex at his very early stage and it becomes a passion of his life, joins students politics at class 9th standard and then leaves study and actively joins politics, his mother is a dominant character in his life, compels him to leave sex and politics and restart study, sends him away from his home where he meets his childhood friend Farhana another character of this novel, he falls in love with her but she does not accept due to his bad character, finally accepts him very emotionally and dramatically after an incident takes place on the way which is the climax of this novel.

There is a twist in the novel, protagonist goes Aligarh for higher study where he finds many friends but during his MBA suddenly Farhana dies due to brain tumor and he becomes alone in life but his friends and Family helps him to overcome the situation. And this is the main tragedy of his life, although he is continuously struggling in different situation as a common man.

After completion of his MBA joins a job in Hyderabad but again he could not sustain there because he finds the lady boss is a cheater and leaves the job then again joins a job where he starts favoring a girl to give her justice who is a rape victim over there, when her mother comes to know the matter he calls him again to home.

As a simple person he never compromises himself with injustice prevailing in the society, he does everything whatever is possible for him to make justice in the society.

Then the main character comes to Delhi where he struggles to find a job but could not manage due to over target, target is something now a days in corporate world which he dislikes very much, suddenly his father dies but he could not go on time due to strike, who is a role model in his life, due to this loss he becomes again alone and family burden comes to his shoulder.

Finally he starts his own business and everything is going smooth but after two years, business is no more going well and suddenly hear the news through his friend that the girl whose single gift makes him writer has suicide herself which makes him shocked.

And this novel is his final ray of hope if it publishes then maybe his economic problem will solve for few days.

By this book he is trying to make the reader understand especially the young generation that problems of life is a part and parcel, and it happens with everybody, if one solved then another will takes its place, so we have to manage and move forward, this is our life.

I’m sure that anyone can read this book will enjoy it definitely…..

Zubair Choudhury, (“Md. Jubair Ahmed Choudhury” is the full name) is a freelance writer and an entrepreneur who writes articles frequently for online articles site and Magazine, a passion for writing always.

Currently leaving in New Delhi with his wife and a kid but originally hailed from a remote village of Assam (North East) India.

Did Graduation in English Literature from AMU and posses an MBA, doing his own business in Web Design and Development (IT Sector), An Entrepreneur.

Life is All About

I think this novel is perfect for those who read for entertainment, Indian English, representation of AMU and North East is awesome, very good, plots, languages are simple enough to understand and a realistic fiction.

This is the only Novel in my life that I ever read and make me cry, though its a fiction but seems to be real incidence, will never bore you, very interesting, awesome narration, curiosity is always there that what happened next? I thoroughly enjoyed, thanks Zubair G, waiting for your surprise.

For me its 10/10 Novel, I'm speechless, have no words for this writer, a 1st time writer can write such a Fantastic novel, I never heard, one of my friend suggested me this novel and I read it, I just completed it in one go, I never find any novel this much interesting. Thanks. I'm in love with him.

Re: Life is All About (e-book)

Short, sweet, simple, understandable easily, superb. Its beautifully described the problems younger generation, struggling days of a fresher. Problems of North East, AMU portion is just awesome, I love it, narration is Fantastic, its a must read novel.