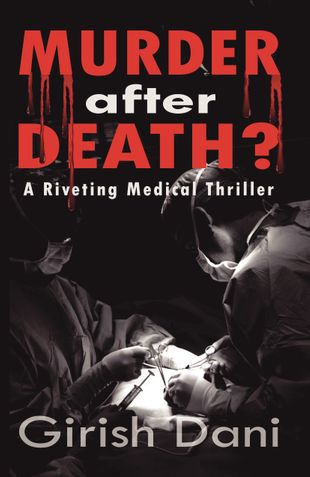 "An addictive thriller...a cliffhanger at every turn."- Mallika
***
Three Countries.
Three victims.
All hale and hearty
Suddenly all Dead.
One brain dead
Are all the deaths linked?
Shaurya was stunned when the doctor announced his daughter brain dead after a freak accident. Refusing to accept the doctor’s declaration, Shaurya shifts his daughter to another hospital where she unexpectedly recovers.
Elsewhere, in USA, Iran and India, research scientists involved in research of artificial organs are dying under mysterious circumstances. CBI officer Mohanty is determined to get to the root cause of death of one such scientist in India.
The research done by Shaurya and his recovered daughter Akanksha leads them to Mohanty. The trio dig deep into the inexplicably diagnosed brain dead victims and deaths of scientists. They find themselves drawn in the sinister designs of a shadowy organisation that has evil written all over it.
Will they find the scary truth?...
*
Dr Randeria replied, “One option is, organs donation, and another, is deciding to disconnect the respirator to save her from suffering further.” Shaurya lifted his face and adjusting his thick glasses looked straight into Dr Randeria’s eyes. Not being able to bear the heat of his gazing stare, Dr Randeria quickly added, “That does not take away the third option, which is status quo. I hope you understand that.”
The intensity of the stare diminished upon hearing the third option.
Dr Shrikant Shetty in a gentle voice added, “The final decision rests with you and will be yours and only yours to make, but keeping other patients alive with her organs and thus keeping her alive in the bodies of those other patients is worth considering seriously.”
Dr Randeria added, “Take your time but do not make an inordinate delay in making your decision if you are thinking of donating her organs. A counsellor can meet with you any time to give you all the information you will need. I hope you understand that.”
Dr Shrikant Shetty said, “My suggestion is to talk to a counsellor first and then think about your final decision.”
Shaurya, as erratic as he was with his moods these days, adjusting his thick glasses looked up in a rage and with a slightly irritated tone, asked, “Are you in a hurry?” He continued to look at them without adding anything more. . .
*
Tehran, Iran
Finally, after a few more knocks, he asked the housekeeping guy Babak to open the door with the master key. Babak opened the door with the master key. He opened the door quickly and let the manager go in. Initially, the manager shouted, “Mr. Saifalien_ _ _ Mr Saifalien.” As there was no response, he went further inside the room, and beyond the door to the bathroom, he suddenly stopped with his vision focussed to the right side, at the bed.
Looking at his shocked expression, Farhad took two steps forward inside the room, and he also got startled and stopped right there, looking palely at the bedside.
Babak followed them in and had the same reaction.
All of them realised in an instant, he was dead.
*
Those who love reading writers like Robin Cook, Arthur Hailey, Peter James, Peter Clement, Tammy Euliano, Judy Melinek and T J Mitchell will undoubtedly enjoy reading this

Dr. Girish Dani was born and brought up in Mumbai. Born on 5/8/1947
He is a practicing Gynecologist since 1975 at Ankur Hospital, Mathuradas road, Kandivali-west, Mumbai (his own hospital).
He loves literature from school days.
He writes in Gujarati and English.
Got first prize for original script in Chitralekha-Bhavan’s cultural center-Reliance-Gujarat Government Sangeet Natya Academy competition 2015-16 & 2018-19 of full length Gujarati plays open to all.
Other interests of his are - acting (got prizes in above mentioned competition), Gujarati poems, Playing Bridge, Swimming, Travelling, Painting.
He has one son and a grand daughter.
Email- girish@ankurhospital.com

The book starts off slow and smartly builds up the multitple stories. These stories were spread out over many countries and involving unique individuals like Officer Mohanty in India, Seargent Booth in USA and MI6 Agent Taylor in Europe. Each with their own complicated cases and dynamic personalites elevate Murder After Death to a higher level.

Despite the various plotlines, this novel delves deep into the corrupt underbelly of organ transplants and medical crime. Readers will find themselves relating to Shuarya's love for his daughter, and his indominitable spirit, Mohanty's thirst for truth and Mohammad's courage. While their stories have different elements, they are all bound together by the strong need to right a wrong. A need that is so prevelant in the world today.
Author, Dr. Dani breaks down medical terminology and lingo extremely well, and even someone who has no knowledege of such terms will be able to keep up! This is a must read for all thriller lovers !