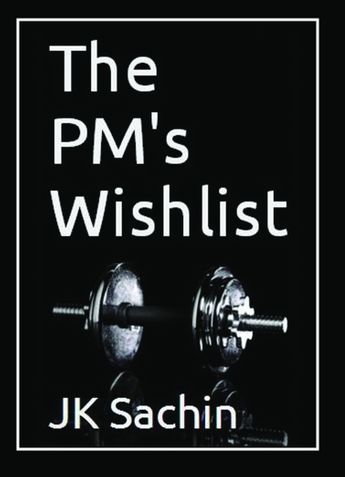 This is a fictional story of how Sharan Karan, a newly elected Prime Minister of India chooses to introduce his ‘wishlist’ to the nation. Is his arrival destined and is he the much awaited man-of-destiny that India needs?

The book makes an attempt to understand the psyche and aspirations of the people of India and perhaps articulates once again the great Indian dream – of taking India back to the pinnacle of prosperity and to its days of golden prosperity.

Sharan Karan charms his followers by his words and actions and makes it possible to believe that the road to becoming a superpower is not a mirage. The key to unlock India’s potential can be made once again, even if the original key has been misplaced. This book dwells on the hard reality that India faces and conveys with a set of brave solutions and seemingly utopian but extremely practical solutions, that India can accelerate its march towards prosperity speedily .

The people of India are running out of patience and practices of yesterday are going to be inadequate to secure desired outcomes of the future.

The Prime Minister, in this book, attacks a plethora of issues that plague the country be it the ultra-low tax base, threat from China, scourge of terrorism, low pace of progress, Industry-government partnerships, black money, transparency in tax payments, empowering citizens to act as watchdogs against corruption, creaking judiciary, over-loaded police forces, female infanticide or the threat to PM’s life. The book astutely weaves a story of how vexing problems can be tackled and how India put on the path of becoming a superpower within ten years!!

This book covers sound economic and political fundamentals and imperatives in a racy, fictional format and it is difficult to disbelieve, after reading the book, that India can be an economic superpower soon.

The PM's job was never easy and powerful elements within the country are plotting so that Sharan Karan loses his job or his life and in no particular order. Does Sharan Karan succeed in selling his ‘ wishlist’ to the nation ? Find out for yourself in this amazingly simple book that simplifies and demystifies complex economics and International politics.

JK Sachin is a clever story teller who can place suggestions, concepts, stories and narratives on nation building, economics and politics in a racy, fictional format.

The PM in the book, masterfully sells the great Indian dream that every Indian will want to see come true in his or her lifetime.

This book is surely a must-read for anyone who is remotely interested in the Indian political scene whether as a participant or as an observer. The book makes an attempt to understand the compulsions of law makers and the efforts that have to go in for actions to be visible to the people. The book stays away from taking sides or endorsing political ideology or parties and that makes the book unique and impartial. Working towards uplifting the country and working on Sharan Karan’s `wishlist’ is possible irrespective of your political affiliations because the Indian dream belongs to all Indians. The book has a lesson for politicians, rulers, administrators, law enforcers, judiciary of any country for that matter because sound economics and populism can be friends, well; this is what Sharan Karan believes.

It is extremely likely that the book will be read by current and future Prime Ministers of India and it would be a good idea to read this book before they do.

Treat this book as an invitation to become a part of an unsolicited ‘ Think-Tank’ for the current and future Prime Ministers of India.

JK Sachin is an Indian author who has more than twenty years of experience in different industry verticals across multiple functions.His insight from the experience garnered in Operations, Marketing, Business Development,Strategy, Private Equity peep into his writing and simplifying complex issues of national governance into a fantasy/thriller format is his forte. His other interests include karaoke and films.

Will Nostradamus prediction of this man of destiny really apply to India ? Will this great leader take India on the path of prosperity in ten years ? These and many such questions will accost you while reading the book.

Without going into details of party politics, this book does a great service to the country by setting the agenda for what the country needs. The spunk of taking the myriad problems that India faces, head on, is admirable as is the optimistic creativity that the PM in the story unleashes.

You will soon start wondering why it took India so long to become a superpower. It has some ' filmy masala' elements as well but over all the book is a must read.

the viral of salesmanship
Ajoy Sahay