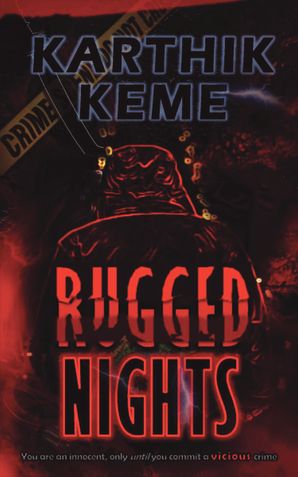 You are an innocent, only until you commit a vicious crime

Aalon is secretive of his flit from home, wandering on the unsmooth roads of Madurai on that rainy night. Headed somewhere on an unplanned journey… Although innocent, Aalon isn’t a saint to feel sad for the death of the man whom he hates.
Why has he left his family?
What experiences does he acquire in his strange, lone excursion?
Above all, why is he in that street… lurking at the scene of the murder?

Rudhran handles the Peter murder case with his usual diligence, and style - a chilled attitude & intuitive approach. The only CID inspector in town, holding a repute of resolving homicide cases in an incredible pace. Tiny clues can hardly hide from his vision. Now he is steely on catching this culprit in the dark. Teaming up with him is Marvin, a restless narc, as drugs are involved. Together they investigate, trail clues, and engage in thrilling pursuits. Chasing criminals & suspects to achieve their own grails. Several unexpected episodes happen during these Rugged Nights. However, the killer is still at large. At a high point, even the ever-cool copper gets exhausted, impatient, and …lost. For Rudhran, the case is delaying and he still has not the faintest idea of who murdered Peter.
How will he revive and run to the unearthing of many dreadful truths?
What will lead Rudhran close to the killer soon?
What will Rudhran do, once he finds ‘him’?

Antony, the smart gangster and drug lord, is the most wanted criminal, hunted by the narcs. He tries to quit being the baddie and change for good, but it won’t be any quicker or easier. Neither will it be for Marvin’s squad to catch him. Antony knew Peter. Murthi and Pandi knew him too.
How are they all connected?
Is any of them involved anyway in Peter’s murder?
Will Antony succeed in starting his life anew?

Karthik Keme is a 33-year-old commerce graduate from Madurai, lives in Hyderabad, employed as an Analyst with Deloitte India. On the flip side, he is multi-artistic, passionate about music and writing. He is a wild enthusiast of movies & books – Fiction. His immense love for fiction stories, right from his childhood, has eventually turned him into a storyteller.
Rugged Nights is the author’s debut novel. Karthik’s previous books were short stories and short novels/novellas, dealing with a variety of genres, including Thriller. He likes to write in various genres and explore, rather than sticking to a certain type.
At present, Karthik is working on his second novel, which is in the Romance genre. This book is expected to be released in the year 2023.

This book mainly follows the story of Peter, a decent employee, who gets murdered at his own house.
This case is Assigned to Detective Rudhran, who is determined to unravel the mystery of how, why , and by whom, was Peter killed mercilessly.
The Story is extremely fast paced, it's easy to read, and the ending will thrill you to another level.
This story is filled with a few more interesting characters, who have their own stories, secrets, and personality. Whilst investigating the ongoing mystery of Peter's death, we also come across the stories of these characters, which is utterly intriguing!

I highly recommend this book to all the mystery lovers out there.
This book was definitely a Five Star Read!