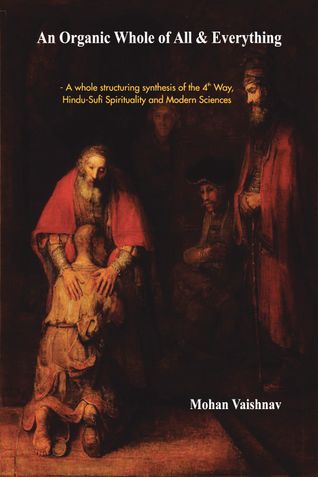 An Organic Whole of All & Everything

A whole structuring synthesis of the 4th Way, Hindu-Sufi Spirituality and Modern Sciences

Italian Translation of this book has been published as ‘Un Insieme Organico di Tutto & Ogni Cosa’.

The central idea of this book is the Science and Art of spiritual evolution based on the synthesis of the Fourth Way, Hindu-Sufi Spirituality and Modern Sciences into an organic whole of the spiritual and material aspects of both, man and the universe; and the entire structure of this Organic Whole is also presented in simple Diagrams.

It formulates a step by step road-map and an overall yardstick for understanding, verifying and applying esoteric knowledge in one's own evolution.

It also presents the work material on its so far least explored dimension, that is: (1) the intrinsic nature of Inner Three Forces; (2) practical meaning of a particular Force occupying a particular Place in the Triad (Process), and (3) manifestation of the Six Triads (Processes) in human activities, and their connection with Body-Types and Enneagram.

This section deals with the fundamental eternal universal laws governing man and the universe, the Ray of Creation and Five ever-existing eternal Entities.

It deals with cosmology, unfolding a Model of the Universe from the combined view point of ancient knowledge and findings of modern science, and also the place of a human being in the entire scheme of the universe.

It also deals with Body-Types, Center of Gravity and Health-Prakriti along with inter-connections among the human psyche, Astrology and Ayurveda.

This section deals with a higher method of learning and synthesizes the Law of Three of the 4th Way with the Hindu idea of Triguna, and how to practically work on inner Three Forces, and also looks at the Three Forces from the point of view of modern science.

Human being and Karma:

This section discusses the human organism as a chemical factory producing and using various grades of energies, qualities of various impressions (matter entering through five senses) and their effect on human organism, and also about what various types of hydrogen exactly mean in connection with the human organism.

Further, it discusses the science of Karma: Karma-Vikarma-Akarma, Karma-Yoga, and the relation among Karma, destiny and spiritual evolution. It also deals with attracting the better aspects of one’s luck.

This section discusses certain esoteric ideas concerning the work on a deeper level, like awakening, dying & Re-birth, various laws governing human actions and their consequences, and the synthesis of the Hindu idea of Brahmi state with the Sufi idea of Fana.

It also studies the Six Processes, Shat-Chakras (and its connection with Body-Types), Kundabuffer and the Enneagram in detail.

As Within so Without:

This section discusses the manifestation of energies of various grades in the human organism and its practical implications, and also about the Artificial Intelligence.

It discusses correspondence between material and spiritual phenomena, the ancient knowledge vis-à-vis modern science, and the inter-connectedness of various Sciences in the organic whole.

Mohan Vaishnav is an author and corporate law professional based at Ahmedabad, Gujarat, India. He is a commerce graduate and an associate member of the Institute of Company Secretaries of India, New Delhi. He is having his office as a Practicing Company Secretary in Ahmedabad since 1997. During the initial years, along with his practice in corporate laws, he developed a software package for computation of financial and tax related projected workings, which many Corporates and Chartered Accountants had bought that time.

Since early college days he developed an inclination to read autobiographies of remarkable people. After occurrence, in March, 1997, of a life changing experience, which has been narrated in his book “An Organic Whole of All & Everything”, he started taking the spiritual Work on himself seriously and earnestly.

In October, 2013 his first book, “All & Everything in Diagrams” was published by Narrow Gate Press, London MMXIII, 7, Riverside Drive, Richmond TW10 7QA, England. Then he wrote his second book “Sonnets of Shakespeare Explained” in July, 2014. So far he has authored following books:

(1) All & Everything in Diagrams
(2) Sonnets of Shakespeare Explained
(3) An Organic Whole of All & Everything
(4) Consciousness and Transforming Suffering
(5) Theory of Everything
(6) Human Types
(7) Awakening, Dying and Re-birth

By synthesizing the ancient Vedantic knowledge with the findings of the modern sciences, his book, ‘Theory of Everything’ presents a simple approach to understand the Universe and its workings, containing therein research work in Theoretical Physics, Mathematical aspects related with higher dimensions of Time and Space, various grades of Times (that is, time within time); and it also unfolds an idea how various sciences are placed in a connected way in the entire scheme of the whole.

An Organic Whole of All & Everything

Showing 2 out of 2
Dharmisthasuthar 5 years, 8 months ago

Re: An Organic Whole of All & Everything

We, in India are brought up with a different culture, and know the importance of spiritual evolution and enlightenment. We grow up listening many mythological stories.

But, in this technological world of today we want to know everything deeply – what, why and how of things. Only blind faith can't make us understand the true nature of things. This book is an answer to that for the real seekers. It is a path and a guide too. This is a rare.

With the sharpness of the Forth Way and Modern Science, the author has made the book very simple and clear. Synthesized ideas presented in the book widen one's perspective and understanding. This book itself is a whole; it can grow as consciousness in seeker. It can be your path-mate and a guide in your inner journey.

Re: An Organic Whole of All & Everything

I have just completed part - 3 of chapter-1 , am reading very slowly but steadily, I have already started experiencing relaxed state. I have started seeing this book as my redemption. I am seeing potential to reactivate myself in work once again as most of my current life and conditions in which I am in these days are covered already and where should I head also is present and that also in three parts only.