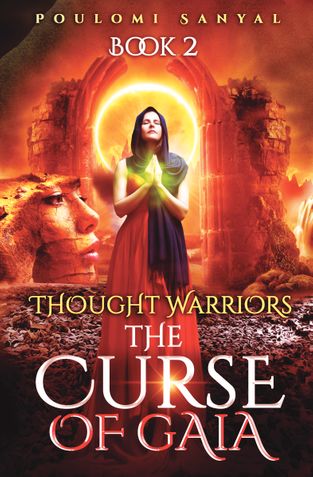 Thought Warriors: The Curse of Gaia

THE SECOND BOOK IN THE MYTHOLOGICAL SCIENCE FICTION SERIES, "THOUGHT WARRIORS", THE CURSE OF GAIA PROMISES TO BE A THRILLING RIDE TO REMEBER FOR LOVERS OF EPIC SCIENCE FICTION WITH A PHILOSOPHICAL BENT.

After averting an electromagnetic pulse attack from the terrorist group, Aifra–with the help of the God-warrior, Kalki–a band of gifted telepaths, the Hekameses, find themselves at the brink of a new catastrophe.

Aifra remains in the shadows while the world accuses Russia of orchestrating terrorism. A world war is brewing which the Hekameses must prevent without revealing themselves. They lost a key member, Dr. Cobb, to treachery and Kalki has vanished. Reduced in strength, the Hekameses split up their efforts.

Alejandro and Zoya search for the elusive Kalki, the prophesied deliverer of the ages. Chris sets out to track down Aifra’s base. The missions are met with tragedies, but they stumble upon the forgotten kingdom of Lumania–a civilization centred around a superhuman ability to manipulate sound. The Hekameses receive intelligence of an imminent raid on Moscow with the goal to flatten the city. They solicit Lumanian support in a rush to prevent this crisis. The Lumanians have survived for centuries on their core principles of pacifism and non-intervention. They are reluctant to change their ways. They speak of a curse of the Mother Earth, Gaia, placed against humanity for its many transgressions and insist it must be borne. The key players stand at cross-purposes as the world braces itself for an apocalypse.

Poulomi Sanyal has been writing poetry since she was ten years old, and she even created her own literary magazine when she was twelve. Sanyal was born in India but has lived all over the world, including Hong Kong and, more recently, Canada. She is fluent in English, Bengali, and Hindi, and she also speaks conversational French.

Sanyal received her master's degree in engineering from McGill University in Montreal and has spent the past ten years working at various engineering MNCs. In her free time, she enjoys writing, painting, acting, and traveling.

Thought Warriors: The Curse of Gaia

Be the first one to write a review for the book Thought Warriors: The Curse of Gaia.