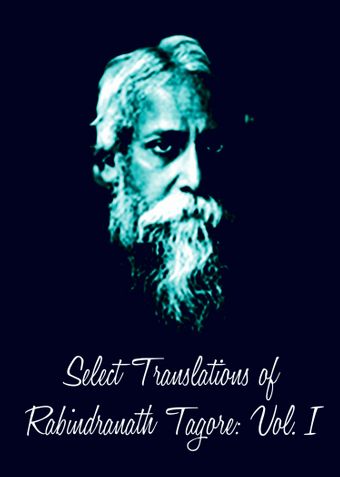 This book titled Select Translations of Rabindranath Tagore: Vol. I contains five of the best short stories written by Rabindranath Tagore and a play all translated into American English. It was featured on Pothi.com for a fortnight from Mon 20 May 2013 to Mon 03 Jun 2013. This is also the standard edition of the book. A LARGE PRINT EDITION of this book for readers with partial visual impairment is available at http://pothi.com/pothi/node/178260

Bengaluru, Monday 20 May 2013: Starting today, India's biggest self-publishing and print-on-demand portal Pothi.com owned and operated by Bengaluru-based Mudranik Technologies Pvt. Ltd. is featuring A. Datta's paperback title, Select Translations of Rabindranath Tagore: Volume I on its homepage. The volume contains five short stories and a play all of which were translated into American English by Datta in 2012. Satyajit Ray had cinematically adapted two of the Bengali sources of these translations, viz. Finally and Missing My Bejeweled. The other three stories in this anthology are Haimanti: Of Autumn, One Night and Clouds and Sunshine whereas the play titled The Crown is a translation of Tagore's Mukut. A. Datta who started writing for The Statesman as a school-goer in the early 1990s has released the first volume of this series to commemorate the passage of 100 years since when the then 52-year-old Rabindranath Tagore took the Literature Nobel outside the European continent for the first time since its inception in 1901.

One Night is a translation of the short story Ekratri and Clouds and Sunshine is Datta's translation of Megh O Roudra. In the year 1969, famed actress, director and writer Arundhati Devi who had grown up in Tagore's Santiniketan had made a Bengali film based on Tagore's Megh O Roudra with Manna Dey in charge of the music department. However, the six translations comprising the book Select Translations of Rabindranath Tagore: Volume I are not just based on their sources but are faithful to Tagore's original works.

In fact all six translations of volume I first made their appearance as eBooks. In 2013—exactly 100 years after Tagore became the first non-white to win the Nobel Prize for literature—they were compiled and four editions were brought out carrying the exact same content. While two of these are standard editions, the other two are large print editions for visually impaired readers and are priced at par with the standard editions despite greater printing cost due to the very large fonts used—the body text being in 18pt Tahoma. There are two standard editions and two large print editions to enable buyers to pay in their preferred currency or buy from their preferred website and printer. The standard US edition is on Amazon and so is the large print US edition and one can pay for them in US$. The standard Indian edition can be directly purchased from this web page by clicking the Buy button above. One can pay in Indian currency for both the Indian editions and there are online as well as offline payment options the latter including payment by crossed cheque.

The preview button or alternatively the book image above can be clicked to read the entire short story Finally which is Datta's translation of Tagore's Samapti for free if you are on Pothi. This facility is available for free for a limited duration only as the eBook Finally is a non-free title on Kindle, iBookstore and many other eBook channels.

Excerpts from this press release may be quoted without altering the meaning or context. The translations themselves may not be distributed without the permission of the translator who holds the copyright. Inquiries including but not limited to those for complimentary copies for reviewers, universities and schools may please be officially eMailed to lookingglassscrolls(a)live.in replacing "(a)" with "@". Organizations which sell books may also officially request a single copy at cost price. This title has no known proof, layout, design or grammatical error, nor any typo. The US edition has been selling on Amazon US for US$24 and is on offer on Amazon UK and other European Amazon sites from resellers for the GB£ equivalent of US$50

Showing 2 out of 2
lookingglassscrolls 9 years, 2 months ago

Because the Best Things in Life Are Free!!

Click on the <strong>PREVIEW<strong> button above to read Tagore's entire story <em>Finally</em> for <code>free</code> unconditionally! Tell your friends about it—use social networking to spread the gift

“It had rained the day before. It was morning time and the pale sunshine and the fragmentary clouds had been taking turns to paint the near-ripe pre-autumnal paddy fields with their goliath paintbrushes. The spread-out canvas was continually changing colors between a bright yellow hue upon receiving direct sunlight, and a pleasant mellow adumbration upon being smeared with the shadows.” This wonderful description of nature’s hide and seek between the clouds and sunshine after a brief shower is directly translated from the prose ‘Megh O Roudra’ by Rabindranath Tagore.
The translator is A. Datta and that story is named ‘Clouds and Sunshine’. His book ‘Select Translations of Rabindranath Tagore: Volume I’ consists of five short stories and a play by Tagore. The remaining ones are—Finally (Samapti), Haimanti: of Autumn (Haimanti), One Night (Ekratri), Missing My Bejeweled (Monihara) and the three-act play titled, The Crown (Mukut).
The translation is well versed and easy to read, thanks to the lucid writing. Datta has excellently conveyed the subtle beauty and the essence of Tagore’s original work throughout his translation. He writes in the Foreword to this book, “Tagore lived and died in an era of chauvinism and his thoughts as reflected in his writings were stunningly unbiased and objective”. It’s true and this reflects in Datta’s work as he keeps every single mood intact in these stories. Every reader of this book, will be able to catch the original magic of Tagore’s way of telling a story: his love of nature and human kind, philosophy, faith, experiences and insights into life and relationships. Datta’s meticulous effort turns the book into a treasured collection for book-lovers who definitely should dive into it. The book is printed by Pothi.com, India's answer to Amazon's Create Space.