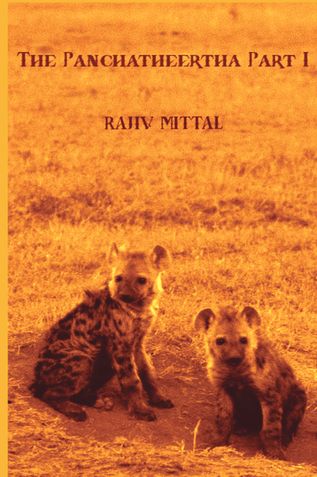 The Panchatheertha (five pilgrimages) is a satirical revision of section 1 of The Panchatantra, the masterpiece Vishnu Sharma wrote between 1200 BCE to 300 CE. The stories are primarily about statecraft and full of wisdom and morals. Despite that, youngsters found them very entertaining. In the tales, animals act and speak on behalf of human beings. The series begins with a parent story that unfolds story after story; each strung to the other by a narrator.

Vishnu Sharma’s reincarnation Shiva Varma has, in this redraft, revived the ancient Indian tradition of parampara (continuation of knowledge from one guru to the next). In his excitement, he forgot the younger age group of his students (shishyas). His characters now try to explain the motives for their actions, also express their feelings; something The Panchatantra had cleverly avoided doing. Within its pages, animals are still made to think and behave like human beings but have not otherwise been harmed in any way.

Those wanting to meet Shiva Varma are hereby informed he dislikes economists, preferring astrology. He is in samadhi (seclusion / deep meditation) and not in hiding.

Bibliophiles are urged to read the original Panchatantra (which Shiva Varma did consider including as an appendix), to truly appreciate the extent to which history gets distorted when it is made to explain itself. Historically, the appendix has been viewed as a vestigial organ with no real function. This is why Shiva Varma chose not to include it… or so he thought!!! Hahaha...

I was born in Chennai, India.

I now live in Australia after a stint of several years in the Middle East.

Writing was a vague aspiration. It became reality thanks to a stranger who said I reminded him of the main character from Desiderata by Max Ehrmann. He quoted from it, ‘Speak your truth quietly and clearly; and listen to others, even the dull and the ignorant; they too have their story.’

My debut novel was 'Brahmahatya'

Panchatheertha has been loosely inspired from the classic panchatantra stories we used to read as kids, though this collection has a much more developed, modern form of those stories.

Though the narration reminded me of lores and classic writing style, the dialogues sometime reflected a modern time. Also, the mention of modern gadgets with kings and queens kinda confused me. The timeline of the stories was never clear.

I liked the stories, but it wasn't something I enjoyed thoroughly. The stories were intriguing enough, but I guess they just weren't for me.

Even so, it was a good enough read to make me want to finish it. If you enjoy folk/classic takes like the Panchatantra, you might enjoy this book!

Blurb-
Vishnu Sharma’s reincarnation Shiva Varma has, in this redraft, revived the ancient Indian tradition of parampara (continuation of knowledge from one guru to the next). In his excitement, he forgot the younger age group of his shishyas (students). His characters now try to explain the motives for their actions, also express their feelings; something The Panchatantra had cleverly avoided doing. Within its pages, animals are still made to think and behave like human beings but have not otherwise been harmed in any way.

The Panchatheertha was considered lost but the discovery of two altered strategies ‘The Loss of Friends’ and ‘Gaining Friends’ should create hope within the large and growing community that has had considerable success with the first and complete failure with the second. Those wanting to meet Shiva Varma are hereby informed he dislikes economists, preferring astrology. He is in samadhi (seclusion / deep meditation) and not in hiding.

There are many intriguing characters not known to Vishnu Sharma in this adaptation; from a sex consultant plying his trade in the locality Ajilundpenodhoka in district Makasam… to a devadasi (courtesan) wanting to conduct the temple prayers because she is bored… to Sage Narada Muni !!


Review-
"The Panchatheertha Part 1" by Rajiv Mittal is something 3rd book by the author but it was first read for me.

By reading the title I was excited to read the book because it even made me think of something story related to number five. God knows what I made assumptions *laughing* And title showed that it is a Part 1 so now I was relieved to continue reading more parts when author writes.

I do never judge a book by cover because at lasts matters is the content in the book and not cover but cover matters to be good because it makes readers to pick the book when the cover is adorable. So, in case of this book I didn't find it that good. I really suggest author that cover should be something different that suits the title.

The characters which are included in various stories are very well portrayed. Author have used simple grammar and unique language with some humour which helped me to grab my whole attention towards stories. The story is about losing of friends and gaining of new friends. Overall, it was a good read of this year with different stories.

Things I didn't liked-
There were many characters which were very hard to remember while reading the whole story.

The Panchatheertha by Rajiv Mittal is one level above his previous book.
The title itself attracted me towards reading this book and also the length is an interesting prospect.
Talking about the stories the book has basically 5 stories based on different situations in life, since I have never read panchtantra but I just loved the plot of each and every story.
Along with the fictional characters we can relate to each and every thing being said to our real lives, the book is perfect combination of crisp and research together.
This isn't any mythological book but good things being put Infront in a joyful, understanding and humorous manner. Narration is free flowing with easy and proper language and characters are very carefully handled which is tough to find in lengthy books.
Rating and judging a cover shouldn't be ideal for every book especially if it is read in Kindle version, so I feel it's fine for the book. Some punch lines by author are just terrific so you won't feel the length as boring or unnecessary, though this book demands time but is equally a treat to read.
So overall, it is an entertaining and knowledgeable read which will teach you some lessons but with all the fun time. I am waiting for part 2 of Panchatheertha as the book has flavour and juice which is hardly found in recent novels so you shouldn't miss reading this one.

The Panchatheertha Part -1 by Rajiv Mittal is a work of fiction. The word Panchatheertha where 'Pancha' means five and 'theertha' means pilgrim sites. Don't confuse with the title thinking it is a mythology book about the pilgrim sites and god. The book is completely different. The word theertha carries a different meaning to it. Talking about the cover, it doesn't suits the title. It could be better and more attractive by having more colours in it. The book talks about the loss of friends and gaining friends. So the story is about king Amarasakti who was searching for a teacher for his three sons. Shiva Varma was called by the king and appointed him as the teacher for his sons. The princes have to leave the palace and be in the ashram for learning. Shiv Varma use to taught them the lessons from panchatheertha having moral stories like Panchatantra by Rishi Vishnu Sharma.

The language used is simple and easy to understand. The book not only entertains but also teaches a lot about life. We can become pilgrim having no home and following the path that heart says. Try not to hold on things, let set them free and live the life that your soul desires.

Other Books in Humor, Satire