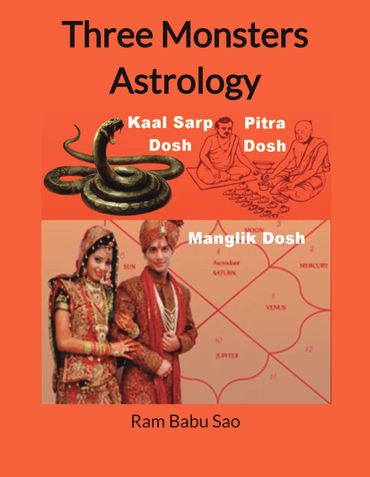 Three Monsters of Vedic Astrology are the Pitra Dosh, Kaal Sarp Dosh and Manglik Dosh. This book, “Three Monsters Astrology”, is a unique book, which is very informative and also easy to understand. One book is truly the equivalent of several books on Monsters reading. You can make the best predictions of horoscope for you or any member of your family with the help of this single book concerning the three Monsters Dosha and sufferings and remedies. This provides some of the elementary and in-depth essential elements and methods on complete horoscope readings of Dosh, sufferings and remedies. Many of the basics of astrologers’ techniques are explained in detail. Pitra Dosh is a curse of the ancestors; it is a karmic debt of the ancestors being transferred fully or partially to the native. The native having Pitra Dosh in his horoscope is supposed to pay for the same. Pitra Dosh is formed in the horoscope of a native due to bad Karmas done by the ancestors of that native and this native is supposed to pay that Karmic debt by suffering the punishments decided for those debts in different spheres of his life. The native may suffer until the debt is cleared either through punishment or through the good deeds done by the native having such Pitra Dosh in his horoscope. So Pitra Dosh in a horoscope doesn't mean that the ancestors are cursing the native having Pitra Dosh in his horoscope.
Kaal Sarp Dosha implies many meanings in Sanskrit, but there is danger and a threat to life associated with the word. Of its many meanings, we can safely conclude that Kaal means time, and Sarp means snake or serpent. Kaal Sarp Dosh can cast its inauspicious shadow over property, finances and health. If Kaal Sarpa Dosha is not thwarted, its influence makes the simplest of works, the most difficult to perform. If all the seven planets are placed in between Rahu and Ketu then it is called Kala Sarpa Yoga (KSY). If all the seven planets are placed in between Ketu and Rahu then it is called Kala Amrita Yoga (KAY). This is considered bad yoga as generally the first half of life, at least, is spent in struggles. Kalasarpa yoga stops other good yogas in the horoscope to give its fruitful effects during the first half of life to the native. Anybody affected by Kala Sarp yoga faces a lot of problems until the age of 35. They face a lot of mental restlessness, pessimistic thoughts and instability in life. They struggle a lot to make their life stable. They get deceived by near and dear ones. Few get separated from their family and move away from their native place. Particularly if he gets Rahu or Ketu Dasha, he faces a lot of mental problems. Some get addicted to bad habits or involve in unlawful activities.
The Manglik Dosh is one such dosh that has a propensity to cause disastrous consequences if the necessary heed isn’t paid to it before marriage. Marriage is an important journey that most human beings partake in and its success or failure amounts to either a blissful union or one that could cause irreparable damage in the lives of the partners. To begin with, it is imperative to understand the Manglik meaning and what ill effects it could cause in the long run. The Manglik Dosh or Mangal Dosha occurs when the planet Mars is located in the first, second, fourth, seventh, eighth, or twelfth bhava (house) from the Lagna within the horoscope of jataka. Mars is known to become malefic when placed with other inauspicious planets in the aforementioned houses. Both males and females are prone to mangal dosha effects and since Mars is a planet related to a certain amount of heat or considered a hot or fiery planet, it brings with it behavioural traits like ego, high self-esteem, arrogance, and a volatile temperament. It is these traits that make it difficult for married couples to find a middle ground or compromise right. It is widely believed that this dosh causes immense unhappiness in a marriage, but contrary to popular belief, that is not always the case. That said, the Manglik Dosh must be investigated by a thorough practitioner and remedies identified to protect those concerned from the effects or consequences the dosha may bring with it. The widespread practice is that individuals afflicted by this dosha must only marry other Mangliks.

He is a meritorious, genius and very intellectual person since childhood. He is a Mechanical Engineer (1970) from Patna University. He secured the “National Merit Scholarship” of India during Secondary Board Examination in 1964. He has deep interest in Astrology since childhood. He is deeply committed and involved in Astrological research and development work. Sincerity, deep study and his hobby have put him into the use of many new techniques and methods for horoscope prediction. He has studied many books and magazines on astrology. He thought of the necessity of a consolidated book covering all the aspects, and topics on subject matters in one place. This book “Three Monsters Astrology” is the gist of most of the topics on astrology. This will result in improving the general quality levels of the reader to greater satisfaction. He has taken a lead in upgrading the process of awareness of various matters benefiting the fresh learner in astrology. Anybody can avail of practical knowledge on various topics related to astrology and can make predictions in detail of himself or his family member with the help of this book. The awareness of various matters benefits the fresh learner in this astrology too.

Many of the basics of Pitru Dosh, Kaal Sharp Dosh, Manglik Dosh in astrology are explained in detail.

Other Books in Astrology

2022 Year For Me
Shweta Kapoor