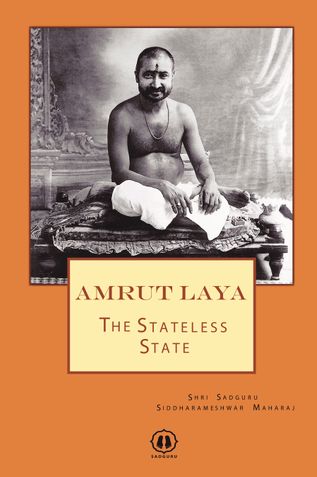 Please keep in mind that these books are printed on demand, so the prices are still higher than printing hundreds or thousands of books and holding them somewhere in inventory, but that is not practical in this case because it is a very small market for these books of Advaita Vedanta wisdom at this time. In the publishing business everyone wants their piece of the pie, but the sellers on Amazon.in have been charging up to triple the price of what people in the West pay! So it was time to act, and now the books will be available printed on demand, or in bulk in India, through Pothi.com. I encourage you to buy directly through Pothi.com, an emerging Indian print on demand company who must compete against publishing industry giants like Amazon and other print houses.
If you are a book distributor and would like to buy bulk copies contact sadguru.publishing at gmail.

After his realization, Shri Siddharameshwar Maharaj began teaching that in addition to the path of long arduous meditation which is often referred to as "The Ant's Way," one can attain Final Reality very quickly through the path of "The Bird's Way," which is the path primarily of listening to the teachings of the Sadguru, as well as utilizing the power of discrimination (Viveka), combined with thoughtfulness and investigation into one's True Nature (Vichara). This is the most direct path to realization. He said that it is through thinking that Ignorance has become firmly established in one's Consciousness, and it is through thinking that Ignorance can be completely dispelled. His instruction as to how this is done is explained thoroughly within the contents of this text. Truly fortunate are those who come across these teachings in their lifetime. It is the voice of the Supreme Self, Paramatman that is found here in these pages. Shri Siddharameshwar Maharaj had many Self-Realized disciples. This book was originally written in the Marathi language by distinguished disciples of Shri Siddharameshwar Maharaj. May the one reading these words attain the realization of the Final Reality with the aid of this text by the Grace of the Sadguru, who is your own True Self.

Showing 1 out of 1
Sadguru Publishing 11 months, 3 weeks ago

I give it 5 stars and other amazon reviewers agree:
-Joseph Barclay Ross
5.0 out of 5 stars IMHO, One of the most important books ever written
Reviewed in the United States on April 4, 2021
Verified Purchase
I have been a student of advaita vedanta and the teachings of Nisargadatta Mahraj and Sri Ramana Maharshi and others for about a decade, and of Eastern Philosophy for fifty years. I have read Nisargadatta's I AM THAT dozens of times and highlighted nearly every word spoken by this great teacher and benefitted enorously from his teachings. Just recently I have found that this great book by his own personal guru Sri Sadguru Siddharameshwar Maharaj, AMRUT LAYA, clarifies and expands upon everything Nisargadatta says and is, if anything, much clearer and more useful and instructive, step by step, on the attainment of higher consciousness and on becoming one with Bahaman, God, the Divine, our True Universal Self. I am so grateful for this book and the teachigns in it.

Autobiography of an ocean
a g