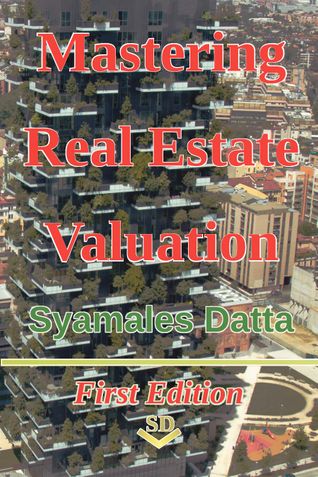 Mastering Real Estate Valuation is the fruit of years of teaching, writing, research and valuing empowering owners and decision makers like investors, governments, tax authorities. Irving Fisher described valuation as a human process in which foresight enters. The book covers basic to advanced valuation specially for varsity curricula. The RICS and IVS are excerpted. Indian legislation is featured but the principles apply to other countries too. Globalisation, liberalisation, FDI have been dealt with. Capital Gains Tax is for gainful disposal of real estate while mortgage valuation determines loans. Methods of school, airport, hotel, supermarket, hospital, bakery and warehouse valuation are covered. Income capitalisation techniques and numerous leasehold problems are special interest while valuation reckoners are provided.

Syamales Datta received his Physics (Hon) from Calcutta University and joined Howrah Improvement Trust. He qualified with RICS in 1971 and retired from service in the spring of 2004 after very memorably serving as chief valuer. A fellow of the IOV and the IOS, Datta has also been a research guide for Annamalai’s masters programme. He has taught valuation at IIEST, IUM, IEM, ILGUS, WBVB, HUDCO, JU, TIU, IOV, IOS, and recently at RVOS, studying where pre-qualifies for certification to value company assets. Datta coordinates symposia. Earlier titles include Valuation of Real Property: Principles & Practice and Advanced Valuation for Secured Lending by Banks and Financial Institutions, the former bestseller is replaced with this paperback by time. Those titles are quoted from in lawsuits. The Valuer’s Day Award in 2007 and the Valuer Excellence Award in 2016 are some of Datta’s recent honours.

The author valued for Andal Aerotropolis, mall development rights in Curzon Park, Kolkata and he was consulted by Indo Nabin and the LIC(I). He did a feasibility analysis project for Kolkata Metro’s wing, east of the Ganga. Government projects included the semi-weekly market in Howrah and Nagaland’s cement factory. Works and writings made headlines and case laws and some are sub judice.

This book contains aspects of property valuation that have come up in the profession recently and may not be discounted. It assimilates much of the latest analytical techniques, legislation and valuation trends. The author is grateful to A.N. Sen, former law secretary for reviewing sundry parts. It is hoped that the practising valuer will find this work useful and will after reading it solve problems creatively beyond the limits of what this volume directly imparts, with confidence.

Syamales Datta received his honours degree in physics from the University of Calcutta in 1963. He went on to <strong>pass</strong> the Professional Associate of the Royal Institution of Chartered Surveyors (ARICS) exams in 1971 while serving the Howrah Improvement Trust (HIT) as a Deputy Assistant Valuer. A series of promotions followed and in 1993 he was made the Chief Valuer of <strong>HIT</strong>, a post he held memorably up to his retirement from service in the spring of 2004. Datta is also life fellow of the <strong>Institution of Surveyors</strong> and the <strong>Institution of Valuers</strong>, both headquartered in New Delhi.<br> In the year 1993, Datta's first volume, <strong><em>Valuation of Real Property: Principles and Practice</em></strong> was published by Eastern Law House, Calcutta. The book became a hit among practising valuers and in 2004 a second edition was brought out. That book is a prescribed text for the <strong>Master of Valuation</strong> programme taught at the Institute of Science &amp; Technology for Advanced Studies &amp; Research (ISTAR), affiliated to the Sardar Patel University in Gujrat, inter alia, and is also sold on Amazon.com. Datta's contributions to periodicals and research are much sought after at valuation seminars and workshops. <br> Syamales Datta has taught valuation at the <strong>B.E. College (BESU)</strong> at Shibpur, Howrah and has also trained up departmental officials of the WB Valuation Board and the <strong>Life Insurance Corporation of India</strong>. Datta has also been a visiting professor and research supervisor at Annamalai University for their M.Sc. programme. He has taught valuation at HUDCO, Institute of Urban Management (IUM), Institute of Engineering and Management (IEM), Institute of Local Government and Urban Studies (ILGUS) and Jadavpur University. <br> The practising valuer will find his books useful if not indispensable and will, after reading them, be able to solve problems more creatively and far beyond the limits of what they directly impart, with self-confidence!

I purchased the book. the book is very good for beginners. I recommend to you all to buy this book.

Good book for valuers. There only limited good books are available in market it is one of it. Worth to read.

It was a brilliant read. This book is a masterpiece rendition of real estate characteristics and talks in depth about how real estate shapes the investment market through chapter-wise detailed analysis. How real-estate valuers by dint of multi-faceted roles act as growth enabler has been very well explained by the author. The book is a gem for anyone trying to understand different facets of real-estate market and appropriate valuation of the same.

Other Books in Business & Economics, Engineering