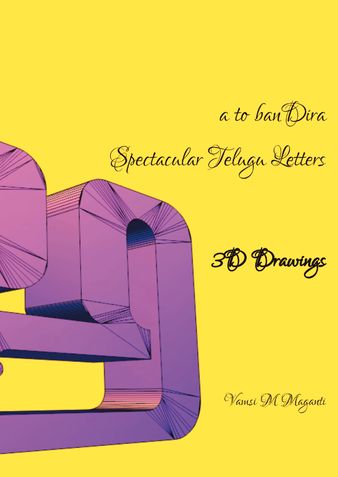 Telugu – The sweetest language of the magnificent country - India - has a spinal cord that is enriched with 56 letters.

Those 56 letters have shaped the course of the language and ripened its sweetness over thousands of years.

This volume of the many volumes that are about to come out, is a humble attempt to present those alphabets in an art form, drawn portraying a 3D effect and then digitally chiseled and enhanced that has never been attempted or seen before.

This book depicts and decorates ALL of the telugu letters that are part and parcel of daily life (except for “ksha”), in the alphabetical order they are taught and learned.”ksha” was omitted for technical reasons beyond my capabilities.The text scheme used for the corresponding telugu letter is presented in transliteration mode (as in telugu lipi converters) to make it easy for one and all.

Hope this book will bring joy to you and I dearly wish many of you can bring out your own art version of the alphabets that have given us - an identity, culture, conversations, literature and so much more over thousands of years.

Thank you for being a patron

Maganti Vamsi Mohan, a proud telugite lives in Sacramento, California. A native of machilipatnam and educated in hyderabad loves his language and literature. Being multi-talented, some of his humble accomplishments are - as an artist he has 6 art exhibitions in his sleeves, as a professional photographer he is featured in the National Geographics daily dozen, as an avid reader and writer he has 127 books to his credit and finally not the least of them all - he also floated a humongous telugu literary website http://www.maganti.org/ sixteen years ago to serve the global telugu community. Hope this book brings joy to all.

Be the first one to write a review for the book a to banDira - Spectacular Telugu Letters - 3D Drawings.