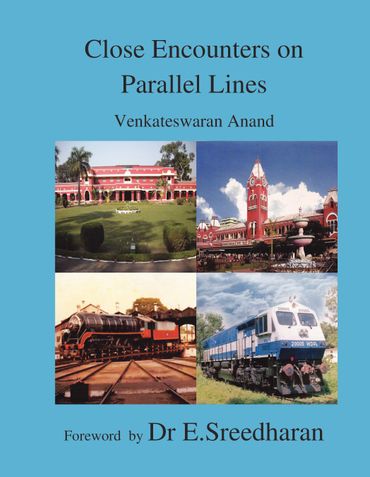 Memoirs of a senior officer of the Indian Railways

Venkateswaran Anand is a Science Graduate of the Panjab University, Chandigarh. He had his early schooling in St.Edwards School, Shimla and completed his graduation at the SDB College. He joined the Indian Railways as an Officer-Apprentice in the Mechanical Department in 1963.During the course of his apprenticeship he passed the examinations of the Institution of Mechanical Engineers and Institution of Production Engineers, London. He is a Fellow of the Institution of Engineers, India and a Member of the AIMA (All India Management Association).
In his forty one year career, he worked in the Central, Eastern, Southern, South Eastern and Western Railways, besides the Integral Coach Factory, Research Designs and Standards Organisation and Diesel Locomotive Works. He was the first Chief Mechanical Engineer of the Konkan Railway Corporation. During his service he was posted to Chennai, Lucknow, Bhusaval (Maharashtra), Katni (Madhya Pradesh), Navi Mumbai, Varanasi, Bhavnagar (Gujarat) and Kolkata.
He has travelled to Canada, Germany, Switzerland, the United Kingdom and USA in connection with the modernisation of the Indian Railways.
He retired as the General Manager, Southern Railway. Post retirement, he served as Advisor to the Delhi Metro Railway Corporation. As a consultant to the Asian Development Bank, Manila, he assisted in preparing a Report on Railway Reforms for the Ministry of Railways, Peoples Republic of China.

Indian Railways has a staff strength of two million plus and is one of the largest employers in the world. It is the busiest and operationally the most complex rail network in the world. No other railway comes anywhere close to Indian Railways. It carries 23 million passengers a day. To put that figure in perspective, it carries the equivalent of India’s 1.2 billion plus population in under two months.

Managing such an organization is not simple. In the wise words of S. Kasy Aiyar, another outstanding railway man:

“One of the curses that have befallen the railway community is that not a single railway man has put down in writing the work he or she did. Though the scope and complexity of the job that even a “junior” scale railway officer does is far greater than Managing Directors (MDs) of many companies. And there are any number of books which often achieve Biblical authority!”

That was written in 2010. We are happy and indebted to Venkateswaran Anand for bridging that void and writing this wonderful book. Anand started as a Junior Scale officer and went on to become General Manager of Southern Railway. Southern Railway is one of the busiest and largest of the then nine zonal Railways. He held that position from 2002 to 2004. Only a handful of railway men are entrusted with the coveted and demanding position of General Manager of a zonal railway.

Venkateswaran Anand is endowed with phenomenal memory and has chronicled the trials, tribulations and triumphs of his checkered career tinged with humor and in great detail.

The track mileage, number of trains, freight and passenger traffic carried, have all increased by leaps and bounds since Independence. Indian Railways is the lifeline of India.

It would not be out of place to point out that Pakistan Railway system started at the same level in 1947 but has stagnated since.

This remarkable transformation of Indian Railways would not have been possible but for outstanding railway men like Venkateswaran Anand, the author of this book.

Anyone with an interest in railways will do well to read this excellent memoir.

I have had the privilege of working with Anand only for a brief period and that was in RDSO. I immigrated to USA in August 1975.

An engaging account of a brilliant rail official's career,narrated with self deprecating humor.A few minor spelling mistakes and formatting errors do not detract from the content.
The author offers invaluable advice to budding railway officers.