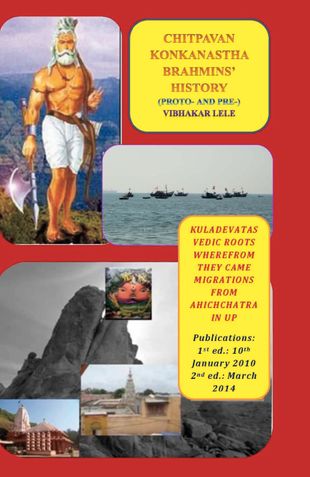 This book pieces together the most important story of who they were, from where they came, their Kuladevatas, original habitats, customs and other important details. It categorically disproves the ancient hollow anecdotes based upon the mere mythical propositions and conjectural guesswork. The author would like to share the story with Chitpavans and well-wishers.

Dr Rosalind O’Hanlon, Professor of Indian history and culture, Oriental Institute, Oxford, who is researching in the Chitpavan Brahmins’ history, during a communication, informed the author on the underlying article on ‘The Roots Of Chitpavan Brahmins’ of which this book is a further elaboration, that she found it most interesting and very much enjoyed, and learned from, all of the materials that this author had collected therein.

This book, with Annexures, makes out the historically most correct proposition about the Pre-history of Chitpavan Brahmins. Most of the important scattered details have been put in place to stitch together the ancient and medieval history of Chitpavan Konkanastha Brahmins. At the same time, the author delves into their Proto-history from the times of sage Agasti.

In the present book, Shri Lele has made several original points not generally known to everybody. Thus for example, the Kula Devata of Chitale family is Vindhyavasini in Uttar Pradesh, and not some temple in Konkan.
He has adopted a novel approach to link up the matter through tracing the Vedic history of Chitpavan Brahmins with reference to the Veda branches they follow.

He shows in Chapter 58, ‘Conclusions on Proto- and Pre-history of Chitpavan Konkanastha Brahmins’, how the postulations of Chitpavan Brahmins’ ancient history he makes conform to the strict criteria laid down for any viable theory on Chitpavan Roots. He has also tried to locate the original habitats of Chitpavans from the Vedic regions where various Veda Shakhas were prevalent in the past. He has used the details of ‘Charanavyuha’ to corroborate his postulations.

He has also given, in the proper perspective, a brief historic outline of many Brahmin communities like Karhades, Aravathokkalu, Badaganadu, Vadama, Iyers, Iyengars et al, hinted by scholars to be related to Chitpavans, to judge the Chitpavan story that he has laboriously pieced together in this volume of almost 500 pages.

He has given geographic maps and bibliography of use to researchers of this subject. He has outlined the parameters of researching Chitpavans’ history in Chapter50, ‘Some Notes to Researchers’.

His use of Talagunda inscriptions is novel. Other socio-politico-economic details of the relevant historic periods also find place in his book to give the reader an idea of the milieu against which the interpretation of historic facts has to made, for proper appreciation of his efforts.

All in all, this is a scholarly and the most interesting book of great relevance to the antecedents of Chitpavan Brahmins who care to know their real past, wherefrom they came and how and when they migrated from their original habitats to the present one in Konkan. Every Chitpavan who prides upon his roots must read it.

Be the first one to write a review for the book CHITPAVAN KONKANASTHA BRAHMINS' HISTORY [PROTO- AND PRE-].

Other Books in Social Science, History

A Plummet into THE BRITISH EMPIRE
Adit Agarwal