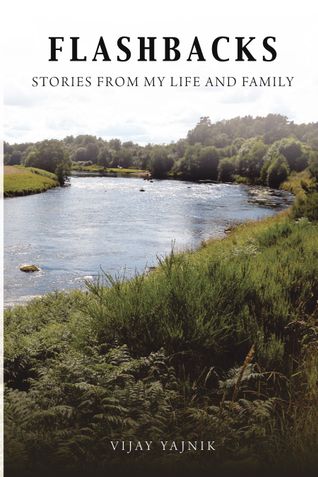 Stories From My Life And Family

“Flashbacks”, is a personal memoir of a life and family from India told in vivid and lucid stories. The stories are based on people, places, situations, and events that actually occurred in India and the USA. They have been presented in a manner which make them interesting and fun to read, while also giving a perspective on history and the times in which they occurred.
The stories generally follow a broad chronological timeline. The first two decades of Vijay’s life in India are shown in a haunting and emotionally evocative manner. Beginning with early childhood, the stories move to the years in Rajkumar College, Rajkot, a public or boarding school, and then to the Indian Institute of Technology, Kanpur.
The stories of the subsequent decades, spanning graduate studies and work life in the USA and Internationally, are a vibrant and an engaging tour de force which is reflective of its times.
This book will have a special appeal for Indian emigrants to the USA, families with children who were born or raised outside of India, or those who have family relations living in the USA.
On the whole, the book, which has been designed as a keepsake, is a lovingly honest treatise on an adventurous life and an illustrious family from India.

Vijay Yajnik was born and raised in India. At a young age in 1959, he was sent to Rajkumar College, Rajkot, (RKC) a British style public or boarding school, from which he graduated in 1966. Then he attended the prestigious Indian Institute of Technology, Kanpur, where he did his B.S. in Electrical Engineering.
In 1971, Vijay came to the USA for graduate studies. He did his M.S. in Information Sciences at the State University of New York, Stony Brook, NY. Then he attended the Eli Broad School of Business at Michigan State University, East Lansing, Michigan, graduating with an MBA degree in 1974.
In a long career, he has worked at various companies in the Financial Services, Retailing, Consulting, and Information Technology industries, where he held senior executive level positions. He has vast work experience which spans not only domestic USA, but also international locations. He lived in Hong Kong for 5 years. In his last active role, he was the CEO of a venture capital funded software company in California.
Today, Vijay is living a retired life in Palos Verdes (LA), California. He enjoys travel, golf, exotic foods, photography, the performing arts, and writing.

A masterpiece of authenticity and detail

- this book provides the reader with an enthralling description of a life which is in parts inspiring and instructive and in many ways self provoking, making us rethink many of the aspects of life we take for granted. For readers of every age, it works differently- for the new generation, it is a window into a way of life they have not seen; for the more mature ones, a reminder of a World that was, and equally, a guide to what life has to offer. Crossing continents and lives of many, Vijay offers a detailed account of adventure, challenge and fulfilment. I can’t recommend this enough.
Chitralekha Majmudar