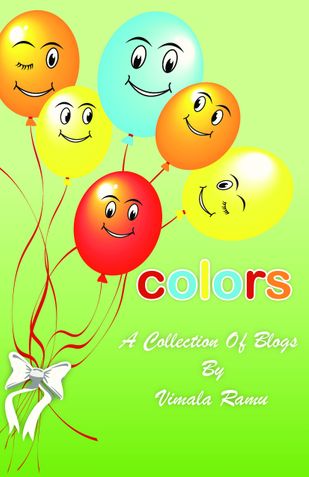 A collection of blogs

resfreshing and soothing...
by: Isabel in Iww.

This book is a sort of therapy for me, that's why I always bring it with me [in the car/bag] it keeps me sane after a crazy day at work or when encountering lunatic drivers on the road. I would pull up on the side of the road and would read 1 or 2 entries/blogs... I felt stress free and fresh again post reading and ready once more to face the world! :)

Sneha S K in Flipkart. com
02 November 11
An engaging read
Vimala has managed to publish her 4th book, which is as engrossing a read as her earlier 3 books, published from Writers Workshop, Calcutta. This book is a MUST READ for lovers of humor and people who love anecdotes about life. This one has them in large numbers and how!

It is a delightful collection of blogs. I had read many of them before but re-reading them was great fun. Each one leaves a smile on the lips. Like I always say, "You have style!" :)
Smita.luthra @gmail.com

Born on 27 October 1937 as the seventh child of late N. Narasimha Iyengar, Executive Engineer, Mysore PWD, Vimala Ramu is a Science and Mathematics graduate trained as a teacher. She married Wg. Cdr. B.S.Ramu (retd) in 1958 and has three children. She started writing in her late sixties. Her ‘middles’ to Deccan Herald and blogs to e-zines and blogsites have been compiled and published as 3 books, Rainsong, Dew drops, Wind chimes through Writers Workshop, Kolkata. These books have been made into audio cds for visually impaired by Mitrajyothi, Bangalore. The 4th book Colors is also a compilation of e blogs. Humour is her forte.

Once a staunch abstainer, I have caught up with on-line reading quite fast. Thanks to my fav bloggers who kindled my interest and led me on to graduate to e-books and such other up-dated versions of readings.

When Vimala Ramu, whom I tailed (pun intended), of course on-line, told me that she had published a collection of her blogs, I did not lose much time in grabbing it. Colors did not come as a surprise because I had already read most of the blogs that were bunched together in the book. But what came as a greater gift is the repeat read which enthralled and amused me afresh and more. Simply unputdownable, once I began reading Colors, it was my constant companion, readily available in my hand bag. There were occasions when, while reading, I would suddenly feel self-conscious as I’d burst out laughing in the crowded Metro or in some other public place where I was made to wait because that is what Vimala intended you to do. Laugh out loud at the quirks of life.

In Vimala’s own words, “As the ‘naughtiness’ of my forties had continued into the ‘fifites’ also, I was game for trying anything for a thrill…” No frivolousness here but just the insatiable thirst for adventure and trying out something new which makes life so much fun-filled for Vimala even in her seventies. In “The Family Treee”, Vimala’s prankish humour manifests in” I hurriedly checked up the names of my two spouses (or is it spice in plural? It is certainly spicy in real life)” The conservatives need not fear an allusion to bigamy here. It is just that “This blasphemy was committed by a website dedicated to the genealogy of its clients” thereby mistakenly attributing two life-partners to the authoress.

Infecting the readers with a generous dose of joviality, Vimala also has the rare capability of putting one firmly down on the ground when she writes, referring to her husband’s noisy morning rituals, ”On a more somber tone I can add that, at our ages, these noises are not exactly disturbing. On the contrary, they are a source of strange satisfaction that the other is alive and kicking!” One cannot help but silently agree to that.

In “Noise Is Good”, Vimala once again reiterates,” Silence or noiselessness signifies death. My husband loves my habit of dropping things in the kitchen with a noisy clatter every once in a while”, because it’s an assurance that “his old lady is “OK” and in “working order” Does it give you the heart-warming picture of growing old together? It does.

Born in a large family and married into a larger one, there is no dearth of humorous anecdotes for Vimala to share. In “Variety Is The Spice Of Life”, Vimala recounts, “ Sometimes, when my brothers-in-law come to meet my husband, I almost expect a Tala Vaidya Kutcheri ( a Rhythm Concert) to start any time as they all have the habit of slapping their thighs with their open palms whenever there is a lull in the conversation.” It is not difficult to visualize the quintessential Indian Joint Family re-union. Vimala brings in a whiff of the long-lost family get-togethers which once used to be the singular source of socialization and entertainment – much craved for then, much longed for now.

But Vimala is her regaling best in “The Divine Surgeries” where her long bus journey to and fro work gave her sufficient time to steal a nap. The result is Brahma wanting to get rid of his extra three heads and Rama, ‘a normal six pack handsome fellow’, wanting to check on a doc who could repair Shurpnakha’s nose while Ganesha looking for the best lipo-suction surgeon to trim down his pot belly. By the time one closes the book one can almost see Vimala impishly winking at you from the back cover!

As Jayanthi Madhukar says “that every family should have a Vimala Ramu”, one cannot agree with her more. At her age, instead of pining and mourning over an empty nest, Vimala has found a novel way of reminiscing her olden times through blog bytes drawing the world closer to her into one big Haa Haa Laughter Club. Thanks and hats off to you Vimala!!

It’s high time the publishing world recognizes that blogs are just not a commoner’s electronic scribbles but a mode of creative and artistic expression epitomized by the likes of Vimala Ramu. As Isabel Cecilia Pascuel chronicles on iww, Colors”…keeps me sane after a crazy day…” the therapeutic value of Vimala’s style is irrefutable and gets endorsed time and again.

The book Colors is available on Flipkart as well as Pothi (www.pothi.com).

Grab it fast, if you are down or otherwise, coz this gonna be a sure shot sparkler in your life…more fizzy and chilling than the shot that you have a mind to down to make you feel ‘up’! -:)

Blogs, the online forum for muse sharing, get elevated to an art form in the hands of certain creative minds. 'Colors', one such collection of blogs, by Vimala Ramu, is a reflection of her lively spirit, witty outlook and exuberant persona. Life for her is a gift which is to be enjoyed as well as honoured and its surprise happenings are added perks which heighten the excitement of living. Written with gay abandon and a generous dash of infectious, impish humour, even simple anecdotes, reminiscences and experiences of her life become stylized penning, worth a read, no, repetitive read, whenever one feels like 'upping' a dampened mood.

It is evident from Colours that Vimala Ramu loves to write. This book celebrates her writing and through that, her family. Read it to catch a close look of both. Colours is a good example of how oral history can become black and white. Every family should have one Vimala Ramu...

It has been an absolute pleasure knowing Vimala and her take on life. I always admired the way she would churn articles week after week, tirelessly. Like they say, for creative writers; anything and everything they see around them can be an inspiration. Reading Colors gives me a sense of wanting to be with the author in her house in Bengaluru and seeing all of it unravelling in front of my eyes. When they talk of great memoirs, they forget that humour is one anecdote; when see from its lenses, life looks beautiful. Vimala Ramu has a lesson or two for everyone and her book is highly recommended to all. Keep writing, Vimala.

Other Books in Humor, Entertainment