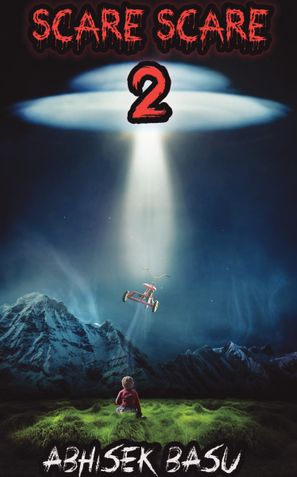 Abhisek Basu's SCARE SCARE 2 brings us thirteen terrifying short stories about ghosts, demons, monsters, time travelers and ALIENS!
Here’s something to read, while you’re on your way to raid Area 51!

#StormArea51 is trending, but a conversation about it takes an unexpected turn.
A man can see 10 years into the future in his dreams, but what he ends up seeing this week is far worse than anything you can imagine.
A girl was found dead near a coffee shop in Australia in broad daylight- but why are no news sources picking up this story? Why are the police refusing to investigate the gruesome murder?
He was told about the woman with four hands. He was told that she had no legs. He was told that she devours human beings. What happens when he finds out that this was not just an urban legend?
A woman wakes up in the middle of the night and goes to the basement to find two dead bodies. One of them has no face.
A man drives home after picking his son up from school, but he is stopped by a man on the road asking for help. He informs him that his wife needs to be taken to the hospital immediately. Was stopping to help a good idea?
A high school reunion causes the narrator to think about his school days. We get a chilling story when he starts telling us about the quiet guy that no one talked to.
A doctor tells us a cautionary tale about his trip to India, and why he believes in certain things now that he did not believe in before.
Two people hiking the Kanjiroba Trail come across something that they've never seen before.
A man talks about why he is convinced that his ex-girlfriend will invent time travel one day.
David and Monica run into their high school senior who promises to show them real magic.

With stories getting over 50k shares on Facebook and hitting Reddit frontpage multiple times from r/NoSleep, Abhisek Basu already has a respectable reputation in the horror community. His short stories have been read by millions of people around the world.

Notable comments from the author's Facebook and Reddit pages:
"This gave me shivers down my spine literally..Please ensure you use your pen more often.. Already a fan :)"
“UNEXPECTED HORROR AT ITS BEST. What did I just read?!”

"Dear author, Despite this story being the only one I've read of yours, am your fan already. Do write more."
“Abhisek Basu is a combination of Stephen King, Lovecraft, M. Night Shyamalan, and Chuck Palahniuk. Truly an amazing writer!”

So, keep your lights on and say hello to sleepless nights. Embrace the darkness and let it guide the way.
SCARE SCARE.

Abhisek Basu is an indie horror author living in India.
Check out his facebook page for free stories: www.facebook.com/Abh1sek

Be the first one to write a review for the book SCARE SCARE 2.