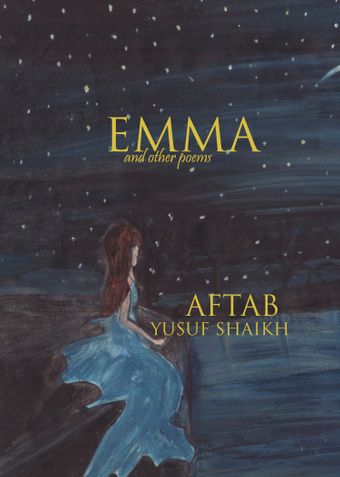 Emma and other poems

Emma and Other Poems is a collection of poems all related to the universal concept of love.

'The work assembled here is forceful, playful, tender and memorable. As stories of both heartache and hope they bring forth vivid characters at moments of longing, love and loss. Many of these poems manage to be both delicately bitter and sweet, surprising and moving. Aftab Yusuf Shaikh is a writer to watch.'

Shaikh was born in Bombay (now Mumbai) to Tahira and Yusuf Shaikh, a boiler cleaning contractor. He attended St. Joseph's School, Kurla, Bombay, Siddharth College and G.N.Khalsa College. He started writing at the age of eight and has since written over two hundred poems.
The American Library of Poetry had included his poems in their sought after collections of 200 poets chosen from among 2 million poets around the world.
He writes in English, Hindi, Urdu and Marathi.
His poems have been featured in international publications like Muse India, The Istanbul Literary Review, The Barefoot Review, The Enchanting Verse Literary Review, Emerge Literary Review, Time Vision, Time Mastermind, Kritya Poetry Journal, Frogpond: The Journal of the Haiku Society of America, Shot Glass Journal, etc.
In March 2010, he was diagnosed with Blood Cancer(Acute Lymphoblastic Leukemia) . After a duel of months, he survived the disease. Back to normal life, he continues writing. His works have been featured alongside the biggest names in Arab poetry like Adonis and Mahmud Darwesh; and Indian names like Arundhathi Subramaniam, Gopikrishnan Kottoor, K. Satchidanandan, Jayanta Mahapatra and Anita Nair.
His poems have also been published or planned to be published in several anthologies such as Overplay/Underdone (Medusa's Laugh Press, 2013), Before There Is Nowhere To Stand: Palestine Israel Poets Respond To the Struggle (Lost Horse Press, 2012), Malala: Poems For Malala Yousafzai (FutureCycle Press, 2013), World Peace E-Anthology (World Poetry Forum, 2013), The Dance Of The Peacock (Hidden Brook Press, 2014), etc. He was shortlisted for the International Capoliveri Haiku Prize 2013 by the Capoliveri Commune, Italy.
Aftab earned his Bachelor of Theology degree in Christian Studies from the International Institute of Church Management, Chennai, in 2014. Currently he is pursuing his Bachelors in English Literature and Psychology from the University of Mumbai.
In April 2015, Shaikh married Umme Fatimah Shaikh( nee Ansari), a Microbiology graduate who was also his colleague while he served as a teacher.

Emma and other poems

Be the first one to write a review for the book Emma and other poems.

My thoughts, my poems and pictures
ratul banerjee