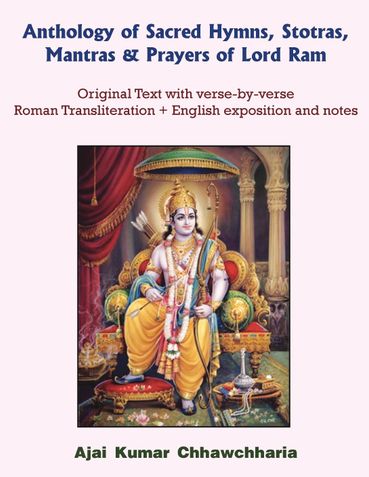 This is a rare and wonderful Anthology of all the Sacred Hymns, Stotras, Mantras and Prayers dedicated to Lord Ram who was a human incarnation or manifestation of the Supreme Being.
The Book incorporates a comprehensive collection of sacred verses that are originally in Sanskrit and Hindi, and have been selected from a wide range of original classical texts, which include the different Upanishads, the Purans, the Sanhitas, and Tulsidas’ book of prayer (called Vinai Patrika).
A verse-by-verse Roman Transliteration of the original text is followed by English rendering that is accompanied by brief explanatory notes.

Be the first one to write a review for the book Anthology of Sacred Hymns, Stotras, Mantras & Prayers of Lord Ram.

Tattvas and Gunas of Creation According to the ...
Ajai Kumar Chhawchharia