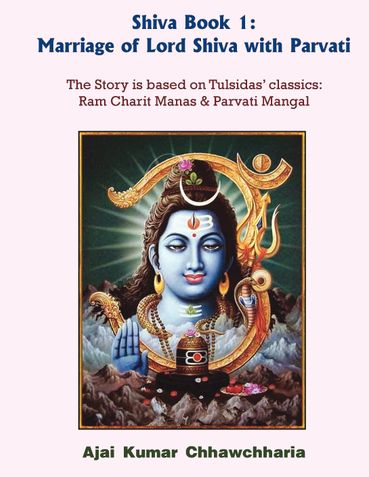 The Story is based on Tulsidas’ classics: Ram Charit Manas & Parvati Mangal

This is ‘Book 1’ in the three-book Trilogy on the ‘Legend of Lord Shiva’. This Book describes the fascinating story of Lord Shiva’s marriage with Parvati in detail. The Book narrates the story entirely as it is done in two beautiful classics of Goswami Tulsidas, the 16th century saint-poet of India, viz. (i) Ram Charit Manas, which is the world famous epic describing the glorious story of the Ramayana, the story of Lord Ram who was a human manifestation of the Supreme Lord, and (ii) Parvati Mangal, a book exclusively dedicated to the poetic narration of the story of Lord Shiva’s marriage.
These two books have been included in full in our present narration, with Roman Transliteration of the original verses that are in Hindi, and each verse is accompanied by an extensive exposition in English alongside detailed notes to bring all matters relevant to the concerned verse under focus.
It’s a rare Book and the first of its kind that has ever been published in English. The wonderful story that had till now remained mostly out of reach of the world because of the language barrier and easy accessibility will have now overcome both the obstacles. It is entertaining, fascinating and charming.

Be the first one to write a review for the book Shiva Book 1: Marriage of Lord Shiva with Parvati.

MANU: "For The Man To Come"
Miguel Serrano