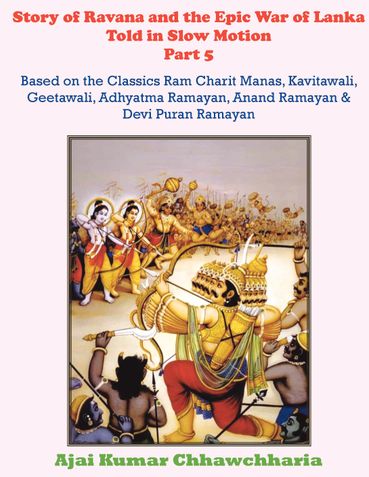 This is the 5th and the final Volume of the 5-volume book titled ‘Story of Ravana and the Epic War of Lanka’.
In volume nos. 1 to 4 we have read about Ravana’s life and time, from his birth and establishment of the Demon kingdom, right up to the Great War of Lanka in which the cruel demon race was decimated and Ravana was killed. All these episodes were covered in Chapter nos. 1-19 in these 4 previous volumes.
Now, in the present Volume no. 5 we have Chapter nos. 20 to 22 (i.e. 3 chapters) wherein we read in vivid details the following episodes: (i) After victory in the war, Sita was reunited with Lord Ram, and about her ‘fire test’ of purity. (ii) Lord Ram’s return to his capital city of Ayodhya along with his wife Sita, brother Laxman, and his friends from Kishkindha and Lanka who had helped the Lord in the famous war. (iii) The Lord’s rousing welcome back home, and his ascending the throne of the mighty kingdom of Ayodhya as its King-Emperor. (iv) The sorrowful farewell of Lord Ram’s guests, especially that of Angad whose departure from Ayodhya was very sad and heart-wrenching. (v) And a quick recapitulation of the whole Story of the Ramayana.
As has been followed throughout this series, all these episodes have been elaborately and vividly described in this 5th Volume too.

Be the first one to write a review for the book Story of Ravana and the Epic War of Lanka Told in Slow Motion Part 5.

ALL MY STARS
ANSHIKA MITTAL

SRI DEVI CHARITAM- AN INTRODUCTION TO MANIFESTATIONS OF ...
Pratha Sharma