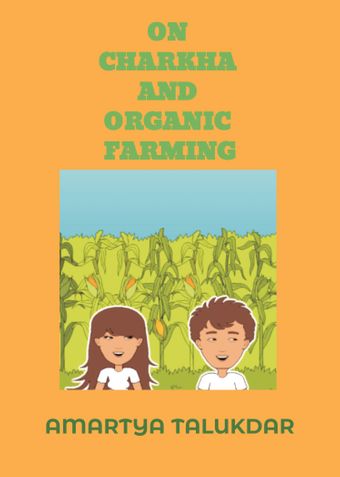 ON CHARKHA AND ORGANIC FARMING

Comics have long played an important role in entertaining young people, and even adults. But comics can also have a role in educating them.

Though the Industrial revolution brought prosperity, it enslaved men and made machine more important than human beings and as a result humanity.

During the Indian Freedom Movement, the spinning wheel or the charkha became a symbol against growing industrialism and materialism which were making man a slave of machine and mammon. The spinning wheel sought to bring back elements that the Industrial revolution alienated viz. respect for human component and nature. The first part of the comics examines the relevance of charkha during modern times.

The Urban society has always romanticized rural life. The farmer’s life was idealized and thought to foster independence and self-reliance. To counter global hunger, during the 1950s and 1960s, scientists developed new strains of high-yield wheat and rice. They introduced them into Mexico and parts of Asia. As a result, production of grain soared in these areas. This bold experiment in agriculture has been called the "Green Revolution."

With the successes of the Green Revolution came problems. To produce high yields, the new strains required chemical fertilizers, pesticides and irrigation. In many developing countries, independent farmers could not afford these new technologies, and became bankrupt. The new, high-production crops also put stress on native plants and animals. During recent times the technology of bio-engineered seeds is threatening to shift power from farmers to agribusiness corporations. Agrochemical MNCs stand to gain tremendously if they can monopolise genetic resources.

Amartya Talukdar is a Masters in Mechanical Engineering from The Institute of Technology, Banaras Hindu University. He is an award-winning blogger. He won The Times of India award for the most engaging blog at The Apeejay Kolkata Literature Festival.
He is a science popularizer, and science communicator, TEDx speaker, computer geek, columnist, and artist.

ON CHARKHA AND ORGANIC FARMING

Be the first one to write a review for the book ON CHARKHA AND ORGANIC FARMING.

Back From The Dead
Terry Hooper