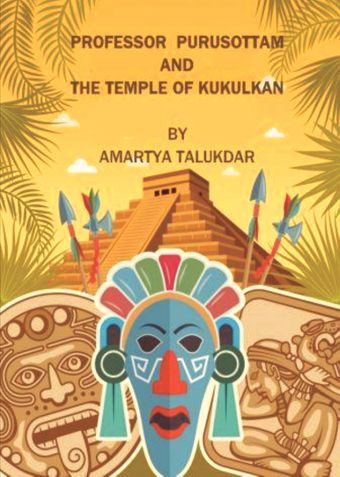 PROFESSOR PURUSOTTAM AND THE TEMPLE OF KUKULKAN

PROFESSOR PURUSOTTAM AND THE TEMPLE OF KUKULKAN is a science friction graphics novel on SETI (the Search for Extraterrestrial Intelligence).

For centuries, people have looked up at the sky and wondered whether we’re alone in the universe. People have imagined various ways humans might encounter and communicate with life from other parts of the galaxy.

SETI (the Search for Extraterrestrial Intelligence) is a scientific effort to discover intelligent life elsewhere in the universe, primarily by attempting to discover radio signals that indicate intelligence. Cornell astronomer Frank Drake is credited with being the first to "listen" for intelligent signals with a radio telescope in 1960.

The plot of the novel centers on a chance encounter with aliens at the famed Mayan Temple of Kukulkan.

The ancient Mayan civilization of Central America has astounded archeologists and researchers for decades. The Mayan people were obsessed with astronomy, boasting a highly advanced calendar that is still accurate to this day. The Mayan pantheon features a feathered serpent-like God who descended from the heavens and is believed to have taught these ancient people about astronomy, architecture, and construction, among other things. Known as Kukulkan in Mayan, this entity was highly revered and, upon his departure, told the Mayans that he would one day return to Earth.

Amartya Talukdar is a Masters in Mechanical Engineering from The Institute of Technology, Banaras Hindu University. He is an award-winning blogger. He won The Times of India award for the most engaging blog at The Apeejay Kolkata Literature Festival.
He is a science popularizer, and science communicator, TEDx speaker, computer geek, columnist, and artist.

PROFESSOR PURUSOTTAM AND THE TEMPLE OF KUKULKAN

Be the first one to write a review for the book PROFESSOR PURUSOTTAM AND THE TEMPLE OF KUKULKAN.