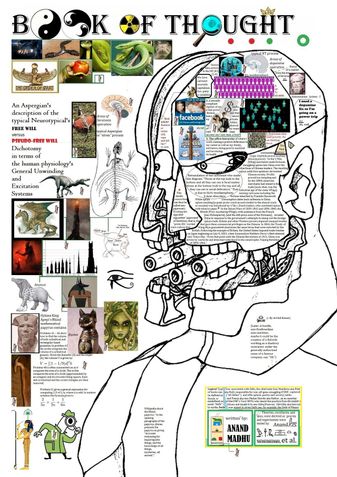 An Aspergian’s description of the typical Neurotypical’s Free Will vs. Pseudo-free Will Dichotomy in terms of the Human Physiology’s General Unwinding and Excitation Systems

Radical, disruptive insights into the psychology of the mainstream "individual"
An Aspergian’s description of the typical Neurotypical’s Free Will vs. Pseudo-free Will Dichotomy in terms of the Human Physiology’s General Unwinding and Excitation Systems

This book of original research follows in the footsteps of the writings of Hans Asperger, the famous German child psychiatrist and neuroscientific philosopher whose research was ended by the World War 2 "played" by the Neurotypicals, or NTs [1]. It was written by Droog, who is an Aspergian, i.e., he has the "atypical, different type of personality" (as had H. Asperger himself). It carefully explains the many subparts of a grand unified theory of the brain, which:

1.) Explains the differences between the 2 basic types of human personality components: The Aspergians and the Neurotypicals; helps readers find their nature by describing the hitherto-unknown typology of human personalities (Myers-Briggs indicator etc. was a sad joke, and doesn’t even come close to explaining personalities as my theory does)

2.) Corrects the famous graph that shows IQ distribution in population as a "bell curve.” That graph was, we have found, wrong. So we finally explain the phenomenon about how, though the bell curve predicts very few people who cannot think, the world seems to be full of them, as seen in the famous movie Idiocracy. Great is the misery of the Millian Pig due to him being ignorant of how to use his own right-brain!

3.) Explains all devious mental conditions, like psychopathy, Histrionic Personality Disorder, homosexuality, terrorist syndrome, and non-verbal learning disability, as functions of the general mental condition that is loosely called “neurotypicalism” by the current generation of Aspergians.

4.) Describes the general excitation and unwinding systems in the human mind -- knowledge of which shows how humans can take control of their lives, that is, maximize happiness [2]. The foundation of utopia – the maximization of the happiness of all types of men – has been solved by this find, I hope you notice that!

[1] The war destroyed all signs of Asperger's work from the memory of the so-called "Academia” … and the Cold War took the limelight instead. In any case, Asperger lived till 1980, and after the war, he recovered his research and popularized the great insight about how Asperger's syndrome is related to intelligence, and neurotypicalism is related to stupidity. That made him, by the 50s and 60s, a cult hero among most thinkers in places like Germany, England, Japan, New York, California, and the Third World, and by the 70s he was famous among most thinkers in the lumpen generations in America as well. Logic had won; that is why most recent good things were from the 70s. In the 80s, the world of thinking really started to collapse, due to the devastating onset of the Yuppie religion, which was 100 times as destructive as the Hippie tradition's chemicalism due to the 100 times as much misguided effort the NTs were putting – doomed was thinking humanity when Maggie Thatcher furiously beat her breast and brutally smashed the labour unions, and, sadly, eventually, the post-Stalin Soviet Union itself was destroyed with a bloody massacre of the people’s politicians in Moscow.

Great was the ignorance of the world’s bourgeoisie and common lumpen, for them to have been so blinded by the false glitter of the religion of the Fascist Church, to have allowed the destruction of all the thinkers’ efforts since the 1850s; gone was the USSR, which had become logical after the death of the dread lord Stalin, which was an event which gave perhaps the most happiness and relief ever to a population alive or in the grave… Truly did that supermodel of the military theorists say, "1 million deaths are a statistic"

[2] By coincidence, deeply reading a logical book like this (i.e. non-fictional and conforming to the natural logic), is one of the best ways to increase happiness… I hope you too gain the elixir which I call opium of the soul -- liberate your right brain!

Droog is a modestly notorious culprit responsible for various mischiefs against neurotypical society: trying to cure the Neurotypicals, provoking them into thought and reflection, and even personally pulling the leg of one, or even many NTs during his childhood, committing thus the great crime of treating them as if they exist (hey, I was joking. Cured NTs are very important to us). Yet such are merely incidental mischiefs bound to occur if one tries curing NTs unreceptive to logic, not to be taken seriously. He plays his part to save the rights of the thinking nobility. Therefore designated as a potential threat to neurotypical society and classified under the NATO callsign "Necromancer," he is out to provide a better world for the NTs, who lack happiness; and to the thinkers, who are unjustly treated by the NTs merely because we are too nice to them; as Mustaine said, "No more Mr. Nice Guy!" And yet, we cannot help being nice. That is because Droog is an Aspergian, the likes of whom can be called "nice people by nature*." Meaning, he has the atypical brain type -- to be technical, his Frontal Executive Network is dominated by the Non-linear Thinking area, rather than the Linear Thinking Area commonly used by NTs. These terms may be strange, since only his philosophy, found in his Book of Thought, touches upon these deepest depths of neuroscience that are yet unknown to the neurotypical mainstream academia. He had chosen, in his maturing years, to stay out of the mainstream -- partly why his brain is different. I advise you also to pursue Gnosis to gain true happiness. Unlike those who discredit words, we know what we are talking about, and that is true especially if we're going as far as to put the effort to describe it

Be the first one to write a review for the book BOOK OF THOUGHT.

Other Books in Medicine & Science, Philosophy

international Journal of Basic and Applied physiology,
Published by Dr.J.M.Jadeja