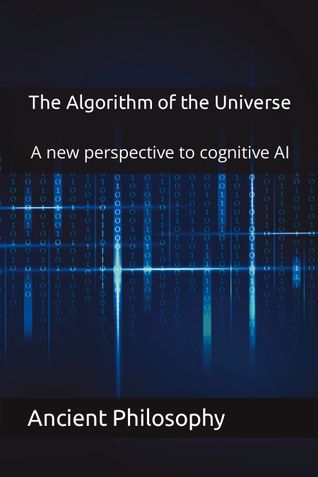 The Algorithm of the Universe (A new perspective to cognitive AI)

There are many attempts to explain the existence of the universe. Even the observable universe around us is filled with unknowns and numerous unexplainable phenomena, let alone the unobservable universe. Each and every theory proposed is just trying to find an explanation for the existence of the observable universe around us, ignoring the fact that it is potentially possible there is an invisible universe which reveals itself as we find newer ways to observe it. We need to first and foremost be able to abstract this universe as we observe it to be just a representation of something else underneath that is projected as this world around us by our descriptive thoughts. Then and only then can we find an explanation that is inclusive of everything that the universe is. As far as we search for the origin of just these appearances of descriptive thoughts, we will only dabble with physics, chemistry, mathematics and computations. It should be recognised that Wolfram introduces a very good concept. Simple things recurse to form complex worlds. But this without the correct transformation remains simply a recognisable pattern. How does this recognisable pattern go on to become this complex appearance of reality that we observe around us is up in the air. The ancient Sanskrit literature has an in-depth explanation of how this reality around us works and how it has come to be this. It just needs the correct context around which to translate these texts to understand it.

For a long time I wondered what would be the best way to explain the algorithm of the universe as seen by the ancients and explained in the Sanskrit literature. I could explain it by using translation of the Sanskrit verses in a certain order. But I find that they do not take the reader on the journey that is necessary to understand and form the correct thoughts to understand the working of and creation of this reality around us. I thought I would write it as a description of astrology i.e., jyothiSha which, if we look at from the ancient view, is actually a science that tells us how to control the distribution of seeking which drives the formation of this reality around us and hence control this reality itself. But, I find that the term has been highly mangled with all sorts of meaning associated with it. I find, even if there was a very beautiful science explained it becomes very difficult to break these pre-conceived perceptions to get the reader to read objectively and understand.

Finally, I have decided the best way is to use the computers that we have created and the AI algorithms that we are trying to code as the best way to describe it, because this was my primary driver to want to understand the Sanskrit literature and to debug the working of the universe. The underlying curiosity to understand why and how the AI that we write does not even seem to be a “fake imitation” of the working of the universe around us. The underlying curiosity to understand how this reality around me is so completely immersive while the virtual reality that we create does not even come near this immersive experience that we have with reality. The curiosity to understand if it is possible for us to create a hardware and software that comes even a little bit close to the kind of intelligence, knowledge and beauty in the algorithm of this reality around us. This has been my driver to decode and understand the Sanskrit literature. So, I find that is the best way to describe the algorithm.

In this book I explain the algorithms proposed in the Sanskrit literatures for the working of this reality around us. I also compare these concepts to what we have currently present in computers and explain how they are different from what is explained in these books and why what we have in computers are not sufficient to create the AI that we want to create. Further, I try to put down my thoughts on how or what can be done to create a system that can be used to implement a AI system.

By Profession, I am a software engineer. Currently, my primary hobby is to decode the upanishads and sanskrit mantras that I have been taught from young age to revere and respect. Along the way, I have realized that most of the translations I have been taught have been flawed and influenced by the beliefs and devotion of the person repeating it to me. The meanings have become subjective and hence have lost their original teachings, ideas and concepts.

When these same works of literatures are translated with a different context set to them, they take on a totally new meaning. A meaning which is simply awesome and much more deeper than any of the superstitious meanings that have been fed to me. A science that even the modern science has failed to grasp and understand. If these works of literature are really the truth, then the ancient intellects and thinkers truly should be lauded to be able to see so far beyond this reality around us.

Whether the meaning is something that is only acceptable to me or many others is something I do not know. But, this hobby of mine got me thinking what if these translations really were the truth? What if truly we are able to hold our minds and body steady to look further, to know further, to understand the fundamentals.

I hope you enjoy these books as much as I do translating, understanding and writing them.

The details of my translations can be found at my blog https://ancientinsight.online

The Algorithm of the Universe (A new perspective to cognitive AI)

Be the first one to write a review for the book The Algorithm of the Universe (A new perspective to cognitive AI).

INFERTILITY AND ITS MANAGEMENT IN DAIRY CATTLE
P. Perumal