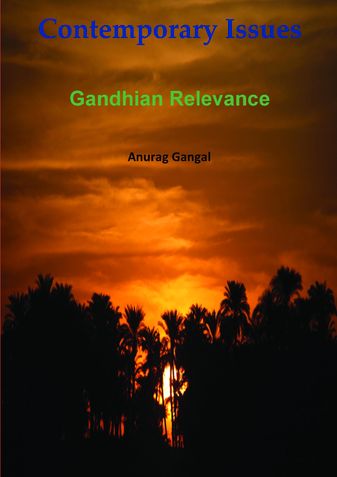 This book is about Gandhian humanitarian view of challenges to life in a national and international scenario today. Humanity cannot survive without the twin values of truth and nonviolence even for an instant. Despite this self-evident facet of our lives, we humans are akin to go for massive and diabolical violence and ever new inventions towards creating newer weapons of mass destruction on public fronts, and in national and international politics. This is a great paradox.

Politics without these values of truth, nonviolence and judicious self-sacrifice is a perverted form of “Politics”. Politics is entirely opposed to any kind of perversion. In effect, the main task of politics is to set right all perversions and disorders. This is what people like Gandhi were doing all their lives.
Answers to present day diverse political and other dilemmas, indeed, lie in further normalisation of the role and effectiveness of values and ethics in society and international politics.

History has very clearly given us at least two thousand and six years to keep remembering our “golden” and “not so golden past”. We have nothing to lose but our modern susceptible “captive minds” if we come out of this “dynamic historicity”. There is an oft quoted saying of Gandhi: “There is no way to peace. Peace is the only way.” However, Peace is not what the term “peace” means in semantics. Peace is a crusade. It is a movement – continuous and perennial – bringing about so many conflicts enroute. Peace is not realisable without conflicts. Highly interactive conflict resolution attempts represent peace process only.

These processes lead to development as well. It is mainly political development that affects every other sphere. These are relating to impact of population growth, environmental pollution, widespread poverty, unemployment, proliferation of armaments, expanding terrorist mafia and network, weapons of mass destruction and nature of conflicts in different regions of the world such as Kashmir issue, Globalisation etc.
Mahatma Gandhi has always been deeply involved in tackling these issues of global, national and regional importance relating to peace and development. The present work, therefore, is an attempt to touch upon various current issues and its relevant perspectives.

Be the first one to write a review for the book Contemporary Issues: Gandhian Relevance.

The Big Small Town: How Life Looks From ...
Aarish Chhabra

India at a Crossroads
Pieter Friedrich

We Will Win
Fidel Castro