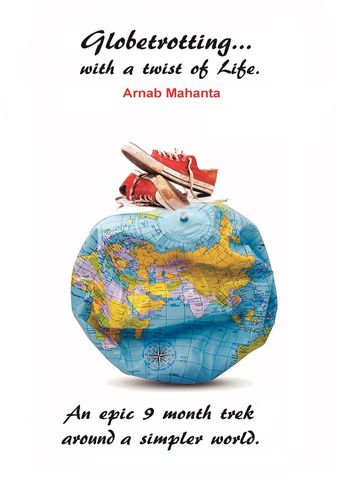 Globetrotting with a Twist of Life

An epic 9 month trek around a simpler world

This book has been 30 years in the making. Soon after Janet and I married in1990, we began dreaming about a traverse around this vast planet before we “settled down”. Thus we threw all caution to the winds and set out to circumnavigate the globe. Life events prevented the writing of this book until about two years ago, when having recovered from cancer and facing the prospect of a shortened life, I decided to leave a written legacy for my family and future generations about a world that we had experienced.

A world that had been simpler and less nuanced. The Soviet Union had just crumpled, China was waking up from a deep slumber, something called the Internet was emerging from the shadows and the concept of a mobile phone in every person’s hand was fantastic science fiction. A fellow by the name of Jeff Bezos was dreaming about selling everything “online” (whatever that meant) and America was the only dominant power in the world. The changes that have happened in the ensuing 30 years since our journey were beyond anyone’s wildest imagination.

We travelled that simpler world. Enjoy the ride.

Arnab Mahanta is a 57 year old High School Mathematics instructor, based in the state of Wisconsin, USA. His wife, Janet, is a Montessori school instructor, also based out of Wisconsin.

Although born in Guwahati, Axom, India, Arnab spent his formative years in the city of Kolkata or Calcutta. He immigrated to the United States at the tender age of 17 and this is where he married his beloved wife over 30 years ago.

Today Janet and Arnab are the proud parents of three grown sons – Carson, Grant and Dylan.

Arnab is a graduate of Purdue University and the University of Illinois at Chicago. Janet graduated from Carthage College, a liberal arts college by the shores of Lake Michigan. Both husband and wife, Arnab and Janet, have been deeply involved in educating future generations for over 20 years.

Globetrotting with a Twist of Life

Be the first one to write a review for the book Globetrotting with a Twist of Life.

A Heart Frozen in the Wilderness
Mary Kloska