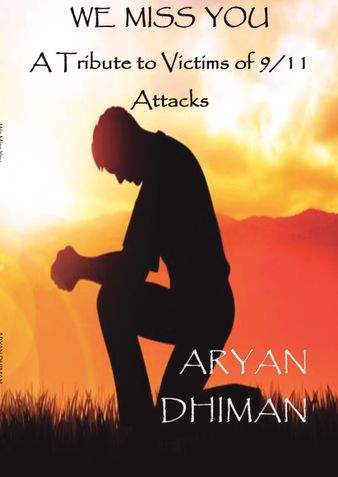 We Miss You: The Edge of the Which Waves-9/11 Attacks Tribute

"He was seen in the Best Twin towers ever witnessed. His mom was so happy that her only son has got a job in one of the best workplaces. His wife was feeling proud for their child to come, but their cheers got shattered when they saw the plane on the TV"

It was September 11, 2001 when many of the similar families lost their beloved whether it was a son, a father, a mother, a daughter or the locals who were just hanging around early morning. They could not even guess while having their tea that only some breaths were left for their life and families.
Everyone was terrified, when the planes attacked the towers, one of the biggest attacks in the history but no one was capable to do anything as it was about to happen.
"The bodies lied,
The police arrived,
But they were also humans,
Who were also dried"
This was the scene when the fires soared in the air.

The Poem takes you to a journey of several people who lost their loved ones in the attacks and their feelings thereafter. It takes you to the journey of a brother, a husband, a wife and a kid who never knew that the morning sun came with the unheard voices they were going to encounter. It is a Tribute to the families and the victims who were lost and salute to some unknown Voices.

Aryan Dhiman has a live-in make believe aura of words, friends with the world stories , and loves to claim love wherever it is by using a bit of Sweet and Spicy Indian Dishes.
He is a published author of Writing Fiction, Reality novels, Character Descriptions in the drama, Religious drastic Endings, Classic Digests, Fantasy and Historical fascination.
Apart from the Writing world, He is busy in Software Issues called an Engineer somewhere out in the world along with a Bit of Psychological Understanding to treat Depressed People.

You can Get a copy of his writings on the direct Link www.aryandhiman.wordpress.com and can get a chance to win a Free copy if selected as a Lucky one

I like to play, I like to enjoy the imagination and it’s feeling. The fingers on the keyboard keys automatically play when I hit them. I am not a make believe writer but a Reality seeker to help people out along with the identification of romance in the today’s era. Life is a story of love, of lovers, of histories forgotten, of yours, of mine and many other seeking people in the sagas, epics which I try to make in the short world of words and books.

Just giving sometime in the day can make me relaxed and inspired to write more, I dive in the river of words to claim what can guide people out of their problems and issues.

I believe that God is the one who has given me the chance to connect with you so that we can work together on the world and make humans actually become better personas and free of suffering.

My family and best friend have inspired me to meet you and make a real world out of somewhere. You can even checkout my Book on A man named Rinpo who acts like a guide to Satvikar who is a rich persona with a big ego like we have, and how they both dive in to make the realization come ahead of them and Buddhist teachings somehow show us a calm, real path to achieve peace.

Passion, Discipline and Aura are the needs of a writer and I believe God has gifted me these to express my feeling so that a connection can be made between you and me.

Give the World, whatever you want to receive back.

We Miss You: The Edge of the Which Waves-9/11 Attacks Tribute

Be the first one to write a review for the book We Miss You: The Edge of the Which Waves-9/11 Attacks Tribute.

A Student’s book to Study the Biography of ...
Abdu Shaheed Azhary

And she said Yes
Avinash Soda