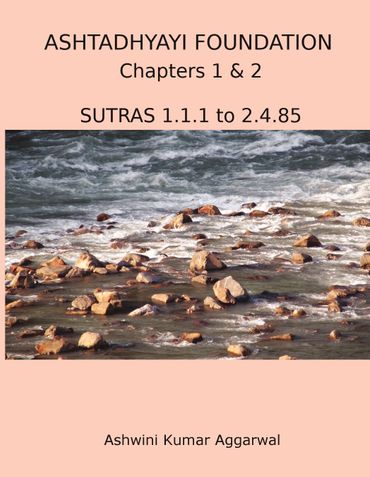 he Ashtadhyayi of Panini is the magnum opus of the famed grammarian who lived circa 600BC. Literally, "Ashtadhyayi" means "The book that has 8 Chapters for study". It is the source for Sanskrit Grammar, and is the ultimate choice for serious linguists and scholars.

In the Ashtadhyayi there are 8 chapters, with each chapter having 4 quarters known as padas. Thus there are a total of 8x4 = 32 padas that are broad Topic Heads. Ashtadhyayi is basically a treatise on WORD-CONSTRUCTION. It gives the precise method for forming words based on Root Sounds listed in an Appendix called the Dhatupatha, known as "Roots of the Sanskrit Language", and a text known as Ganapatha that contains many Noun Stems. Words are of two broad types - VERBS (Tinganta) and NOUNS (Subanta).

This book gives a detailed English commentary on the foundation chapters 1 & 2, i.e. on the initial eight padas. Topics are clearly mentioned, and so are the technical terms. There is also an index listing the Sanskrit Sutras w.r.t Siddhanta Kaumudi and Laghu.

Panini was a Linguist, Grammarian. Programmer, Sage and Visionary. His Ashtadhyayi describing the Vyakarana of the Sanskrit language remains till date the most complete and authoritative work in this regard.

Ashwini is with the Sri Sri Ravi Shankar Ashram based in Punjab.
He loves to practice Yoga, perform Homa, study Sanskrit and be at home.
He was born in Ludhiana and completed his pre-University from Govt. College for Boys.
He has also written texts on Upanishads & Sanskrit Grammar delving into Panini’s Ashtadhyayi.

Be the first one to write a review for the book Ashtadhyayi Foundation Chapters 1 & 2.