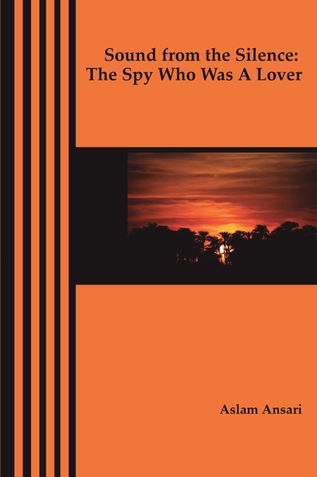 Sound from the Silence: The Spy Who Was A Lover

“It’s better to fight for love than for the land or hate,” he always said.
This story is a blend of non-fiction & fiction, emerging from a memoir, moving into imagined landscapes… towards a “future world” that has no wars, no weapons, and no terror - a world without misery…
The story revolves around a protagonist who is working for intelligence agencies - but he is an idealist who wants to see the world as a better place for everyone. In the last phase, a radical change takes place at the Pentagon. Some military generals, and some high-ranking officials inside the government, wake up and rebel against the war systems. They expose the conspiracies that are causing wars and terror everywhere… Ultimately, the time moves into a “future world” with peace and prosperity for everyone.

He was the spy who was a lover.
He was Roshan Mirza…
He could get anywhere… without any hindrance.
Barriers could not stop him.
He was like a spirit, a free spirit, moving through the universe... interacting with everyday life - and walking through another life that’s beyond anyone’s perception… He was a spy - but a spy who questioned every convention.
He was a “new James Bond…”
“No guns, no revolver - just poetry and music, that was his tool box.”

He was out for an unusual quest, the most unusual quest a spy ever had.
He wanted to stop the war machines and beat their masterminds in today’s world affairs, so he became a part of the machine to challenge its very function. But on his journey for idealism, he got into an impasse: financial pitfalls, disillusion and a broken relationship with the woman of his life who ended up in a web inside a military compound. All this just intensified his quest...
He emerged as a sound from the silence… “He was the spy who was a lover.”

Sound from the Silence, on the one hand, goes into the core of grand political conflicts - and on the other hand, reflects the social taboos and misconceptions deeply rooted in the collective psychology of modern men and women in the context of relationship complexities…

Aslam Ansari is a documentary filmmaker based in Paris. He is engaged in research and investigation on socio-political issues. One of his short films, It's A Cosmose Gone Wild, has been screened at the Short Film Corner, Cannes-2008.

Sound from the Silence: The Spy Who Was A Lover

Be the first one to write a review for the book Sound from the Silence: The Spy Who Was A Lover.

The Key Of Happiness In Life
Hitashbehera