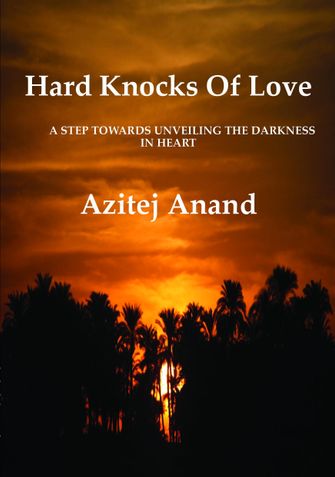 A step towards the unwilling darkness in heart.

“Hard Knocks of Love” by Azitej Anand is the story about the pursuit of happiness and love on the one side, then on the other side, it marks its excellence by the theme of duly tribute and sacrifice. The pursuit of Margret’s happiness by Dave and Racy suffuses the fabrication of different tragedy across the story. The hard knocks of love illuminate the essence of love, tragedy, which seeks the attention of readers towards each and every aspect that fuses the mind with the feeling of catharsis. The birth scene, a love scene, suicidal scene and a profound love between a brother and sister is so perfectly highlighted in the story. The tribute of Racy is the core touching part of the whole story.

Azitej Anand, born on 8th April 1990 in India is a poet and a story writer. Mr. Anand belongs to a middle class family and at the age of 24 he wrote his first book, i.e. “Renovation Is My Aim” in 2014, the book is an excellent fusion of thirteen poems which add a different taste and flavor to its readers. Further, he accelerates his work in the realm of poems by writing ten more poems related to different aspects of nature and society that touches the central core of many readers.

His famous poems are - An Umbrella Girl, Sufi-Standing on the verge, Goodbye, Ode to pebble, Weeping Candle, Future Imputation, Heal the miniature, Imaginative face on the floss, Vidai (A valediction) etc.

He completed his matriculation from Blue Bells School, Naraingarh (Ambala) and due to some reason his family, which is of four members that is a father, mother and elder brother shifts to Gurgaon city. Mr. Anand than by living in Gurgaon completed his Secondary Examination in Science Field from R.T.R.G.V school, Sureraha. It is his graduation from English which induces an everlasting enthusiasm in him in the realm of writing. After graduation in the realm of English, he moves towards attaining higher education and is now pursuing Post Graduation in English stream from Govt. P.G College; sect-9. He is now with his family residing in the Bajghera village in Gurgaon city.
Information about Author

Be the first one to write a review for the book Hard knocks Of Love.