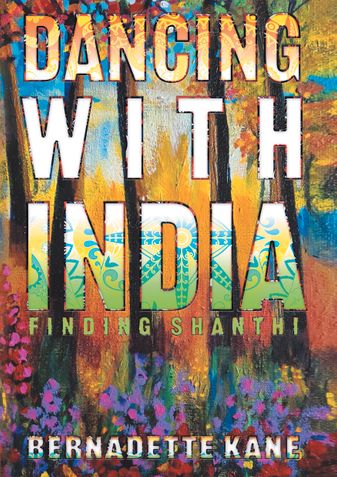 From a Covid lockdown in Scotland to a fire-cracking adventure in a South Indian Ashram, Bernadette Kane's debut novel, Dancing With India, is the first part of a deep and engaging tale of one woman's search to uncover what ails her.

Prologue
Covid-19 is well into its second year when Marney McDonagh, finding herself isolated and alone during the endless lockdown, hits on an idea to help save her sanity. She’s going to start an online writing group. And she already knows what she wants to write.
At the start of the pandemic, she remembered Daniel Defoe’s old classic novel, A Journal of the Plague Year. That book had been written three hundred years before, way back in 1722, and Defoe had claimed it to be his own daily diary. He had kept a record, he said, of his experiences during the devastating Bubonic Plague of 1665, and his Journal was that record.
This Journal had been something of a sham though, as Marney remembered from her student days at Glasgow University. She recalled that Defoe had only been five years old at the time of the Great Plague, and that he had created his journal by reading other people’s accounts of it, and then presenting them as his own first-hand experiences.
Marney decides though, that she will keep a true, authentic record of one person’s life, her own, as well as track the worldwide battle against the virus. It would help her pass the time, she thought, and who knew, one day it might just provide an accurate account of these crazy days.
But when she sees the billowing clouds of smoke rising up from the makeshift crematoria springing up all over Delhi as the people of India become overwhelmed by the numbers of Covid dead, Marney finds herself plunged into a deep reminiscence of how her many years spent in that country all began.
From a Covid lockdown in Glasgow, Marney’s journal dives back fifteen years, to her arrival at Shanthi Ashram. Her stories of ashram life buzz with all the fire-cracking colour and passion of the Indian South, and the exotic band of characters whom she meets, with their deep joys, passionate intrigues and utter horrors, give her a glimpse into a new and fascinating world.
As Marney listens to the daily talks by Brother Joseph, the ashram’s Spiritual Teacher, and spends long afternoons with the Sadhu who lives in the forest, her knowledge and understanding of Indian spirituality grow, forcing her to look more deeply than ever before into what it means to be human.

Bernadette Kane is from Glasgow, Scotland, where she lives. She spends her time writing and painting. Her love for the Loch on her doorstep, Loch Lomond, regularly draws her outdoors for wild camps and swims. The incredible scenery of her native Scotland is a continuous source of inspiration, both for her writing and her landscape paintings. She studied Theology and Literature at St. Andrews University, and was awarded their top prize for Excellence in Literature, the Lawson Memorial Prize.

Loved this book. It's about the writer's experience when she was desperate or confused and comes to know about a spiritual person, Brother Mangus, who resides at Shanthi Ashram. Her description of the place & people makes you crave the go there and spend some time. Art is another hobby that heals her. This is an interesting book about her journey of discovery during the Co-vid 19 pandemic. Must read.