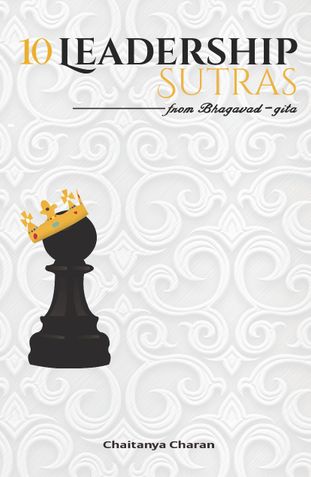 Presented as an engaging question-answer discussion between a corporate leader and a leadership consultant, 10 Leadership Sutras from Bhagavad-gita makes the timeless wisdom of the philosophical classic, the Bhagavad-gita, accessible to the contemporary mind. Condensing the relevant principles from the Gita into 10 sutra-like statements, it brings a richer, more spiritual appreciation of life, work and success. It provides principles and practices addressing daily concerns such as:
• Managing stress – Be concerned, not disturbed
• Team building – Words shape worlds; watch your words
• Facing reversals – Life determines our problems; we determine their size
Suited not just for present and potential leaders but also for all those who wish to lead themselves more effectively, 10 Leadership Sutras from Bhagavad-gita paves the way towards stronger commitment, greater achievement and deeper fulfillment.

Chaitanya Charan Das is a celibate spiritual teacher (brahmachari) at ISKCON Pune. He has done his Electronics & Telecommunications Engineering from the Govt College of Engg, Pune. He subsequently served as a software engineer in a multinational software company, Patni Computer Systems. He also secured 2350 out of 2400 in the GRE exam, bagging the top rank in Maharashtra. Seeing the prevalent problems of stress, depression, addiction and overall misdirection – all caused by a lack of spirituality, he felt inspired to dedicate his life to the cause of jnana daan, offering systematic spiritual education, under the aegis of VOICE / ISKCON. He is a member of ISKCON’s topmost intellectual body, the Shastric Advisory Council, which offers scriptural advise to the GBC (Governing Body Commissioner). He is the associate-editor of ISKCON’s global magazine, Back to Godhead. Presently he conducts seminars at various reputed educational institutes all over India including IITs and NITs as well as leading MNCs like Tech Mahindra. He serves as the spokesperson for ISKCON, Pune. He has presented papers on the interface of science and spirituality as an invited ISKCON delegate at national and international conferences, including World Peace Conference, 2006 and World Peace Congress, 2008. He runs an international cyber magazine called ‘The Spiritual Scientist’, in which he has written over two hundred articles that give a scientific and logical presentation of Vedic philosophy. He is the author of the world’s only Gita-daily feature, wherein he writes daily a 300-word inspirational reflection on a verse from the Bhagavad-Gita. Till now he has written over 600 Gita meditations that are posted daily on his website and are read through daily feeds by thousands from all over the world. His website www.thespiritualscientist.com is among the most popular spiritual sites for intellectually oriented spiritual seekers. He has answered over 1100+ questions from people all over the world on the site. His writings have been published in newspapers like Times of India, Indian Express, Economic Times, Hindustan Times, and Sakaal Times as well as global spiritual magazines including Back to Godhead. His writings in English have been translated into several foreign languages including German, Chinese and Romanian and several Indian languages including Kannada, Telugu, Bengali, Hindi and Marathi.

Be the first one to write a review for the book 10 Leadership Sutras from Bhagavad-gita.