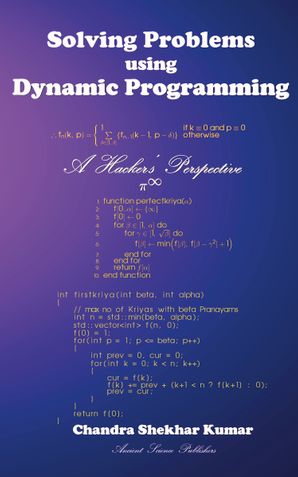 A hacker's approach to a coding problem is beyond the foundational aspect of underlying genetic and computational structures.

A concept becomes not difficult because the complexities built into it are clarified. In a bid to reach the core of the problem, the concept is split-broken into fragments, complexities are exposed and delicate points are examined. Then the concept is recomposed to make it integral and as a result, this reintegrated concept becomes sufficiently simple and comprehensible.

This helps build a hacker's insight to reveal the internal structure and internal logic of the concepts, algorithms and mathematical theorems.

This book provides a hacker's perspective to solving problems using dynamic programming. Written in an extremely lively form of problems and solutions (including code in modern C++ and pseudo style), this leads to extreme simplification of optimal coding with great emphasis on unconventional and integrated science of dynamic Programming. Though aimed primarily at serious programmers, it imparts the knowledge of deep internals of underlying concepts and beyond to computer scientists alike.

He is the CTO and Co-Founder of Ancient Science Publishers.

He holds a degree of Integrated M.Sc.(5 yrs) in Physics from IIT Kanpur.

Be the first one to write a review for the book Solving Problems using Dynamic Programming : A Hacker's Perspective.